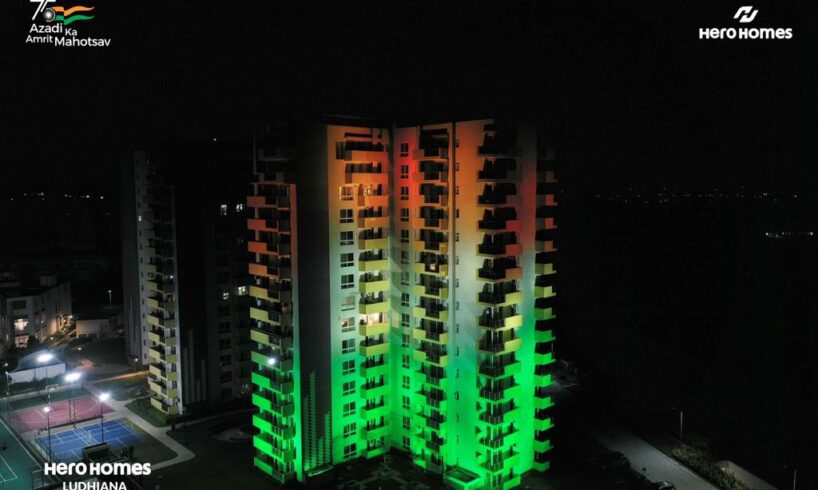 New Delhi: The whole nation on August 15th celebrated 75 years of independence. Prime Minister Narendra Modi had made a special appeal to the people across the nation.

The country was celebrating Azadi Ka Amrit Mahotsav to remember the freedom fighters, and their struggles to give us the long-wished independence. The whole nation was painted in Tricolor.

PM Narendra Modi had urged the people of India to hoist the National flag on their rooftops, and initiated, “Har Ghar Tiranga” campaign.

However, Hero Homes, one of the leading real estate projects across India, celebrated Azadi Ka Amrit Mahotsav in a unique way.

Instead of only hoisting flags, the whole building of Hero Homes, Mohali and Hero Homes, Ludhiana was lit in the colours of our beloved and respected National flag.

Hero Homes building in sector 88 Mohali were illuminated with Tricolor keeping in mind Azadi Ka Amrit Mahotsav. The residents also appreciated the move of the management of Hero Homes Mohali.

The major motive was to instill the sense of patriotism and nationalism amongst the residents. Undoubtedly, the building illuminated in Tricolor gave a splendid look and even the passersby were mesmerized looking at it. Even they appreciated the way Hero Homes celebrated Azadi Ka Amrit Mahotsav.

The management and residents of the Hero Homes projects in Mohali hoisted Tricolor on the Independence day. All of the residents cherished the celebrations and appreciated the activity.

Hero Homes Ludhiana is also one of the fastest growing real-estate projects in Punjab. Also, amongst the city residents, it is very famous for the celebrations of special occasions, they do.

This time also, Hero Homes’ Independence Day celebrations were talk of the town. The building illuminated with Tricolor gave goosebumps to the residents and everyone was saluting it, as if a Tricolor itself was hoisted.

The management and residents of the Hero Homes Ludhiana also hoisted Tricolor on the Independence day. All of the residents enjoyed the celebrations and appreciated the activity.

The motive behind this ultimate theme was to celebrate the Azadi Ka Amrit Mahotsav in a different way. Also, through this Tricolor projection theme, Hero Homes tried to spread nationalism and patriotism amongst the people.

ALSO READ: 10 best cafes in Delhi to hang out with your friends and loved ones