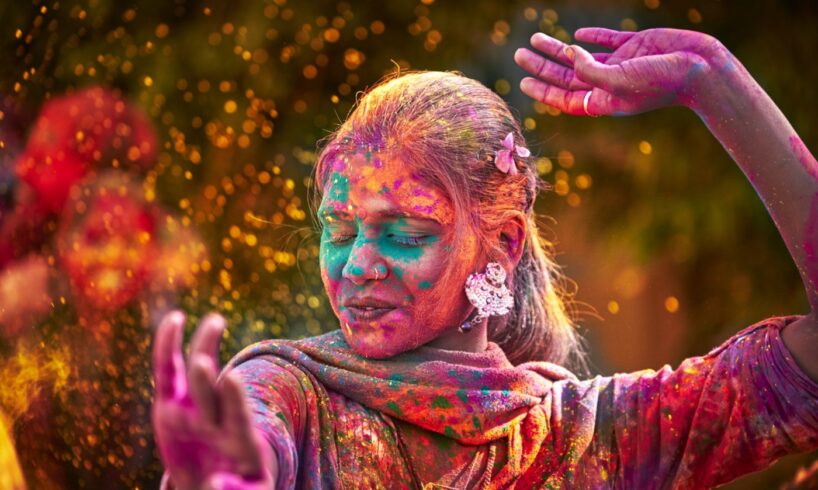 Holi is one of those festivals that people from all walks of life, of different age groups, enjoy. The whole nation waits for it and craves the atmosphere that this festival creates. Though Holi is celebrated in every state and city of the country, the Holi celebration of some particular cities is very popular. Here are the 7 best places in India to celebrate Holi, one of the most awaited festivals in India.

But first of all here’s why Holi is celebrated in India!

The festival of Holi marks the arrival of spring and the end of winter.

Lord Krishna was blue-skinned because a demon named Putana poisoned him with her breast milk. Therefore, he feared that Radha would dislike him because of his complexion. Then Lord Krishna’s mother asked him to approach Radha and smear her face with any colour he wanted. The playful colouring gradually evolved as a tradition.

There’s another tale behind Holi. Hiranyakashipu was the king of demons. He could not be killed by any man or an animal. Therefore, he grew arrogant and demanded that everyone should worship him. However, his son disagreed with him and continued to worship Lord Vishnu.

For the betterment of the world, and to save the people from HiranyaKashipu, Lord Vishnu appeared in the avatar of Narsimha- half man, half animal, and killed Hiranyakashipu. This is why Holi is celebrated.

Now, here’s the list of the al the places you have been looking for to celebrate Holi.

Other than Bankey Bihari Temple, the Gopi Nath temple in Vrindavan attracts people from different parts of the country. On Holi, thousands of white-clad widows gather to play Holi with not just Gulal, but with marigold and rose petals. The atmosphere is mesmerising as you will continuously listen to several devotional songs related to Lord Krishna.

Jaipur is known as the Pink City of India. The place is royal. In fact, the whole state of Rajasthan is full of palaces and forts. Here in Jaipur, the Holi celebrations are giant. Several royal hotels and palaces organize different Holi celebration functions. Once in a lifetime, you must celebrate your Holi in Jaipur. Just imagine! The whole surroundings filled with different colours, the aroma of gulal, cheerful and happy faces all around and some amazing Rajasthani folk dance performances.

Barsana is famous for its Lath Maar Holi. This is a place near Mathura and surely, a must-visit near the days of Holi. During the afternoon, men from nearby Nandgaon lead to the main Krishna temple through the narrow lanes of the city. The ladies block their way with heavy wooden sticks. They deliver heavy blows with full enthusiasm to reign down men’s special leather shields.

Banaras or Varanasi is considered one of the holiest cities for Hindus in India. The city is on the banks of the Ganga river. At the Ganga ghats, the atmosphere on the day of the Holi festival is wonderful.

In the evening, a walk around the old city is a must when people burn effigies of demons. Enjoy mouth-watering Gujiya from local sweet shops and cherish the local way of celebrating Holi.

The Golden Temple in Sri Amritsar Sahib is one of the holiest shrines of the Sikh community. Here also, the festival of Holi is celebrated with full zeal and enthusiasm. Inside the Golden Temple premises, you will see people of different age groups, different communities cheerfully and very peacefully enjoying this festival of love.

Just a day before Holi, Hola Mohalla is celebrated in Anandpur Sahib. The Gurudwara premises is near Shivalik Hills and it attracts the Sikh community from different parts of north India. The Nihang Sikhs also demonstrate spectacular martial arts and equestrian skills. The old art form that they demonstrate is called “Gatka”.