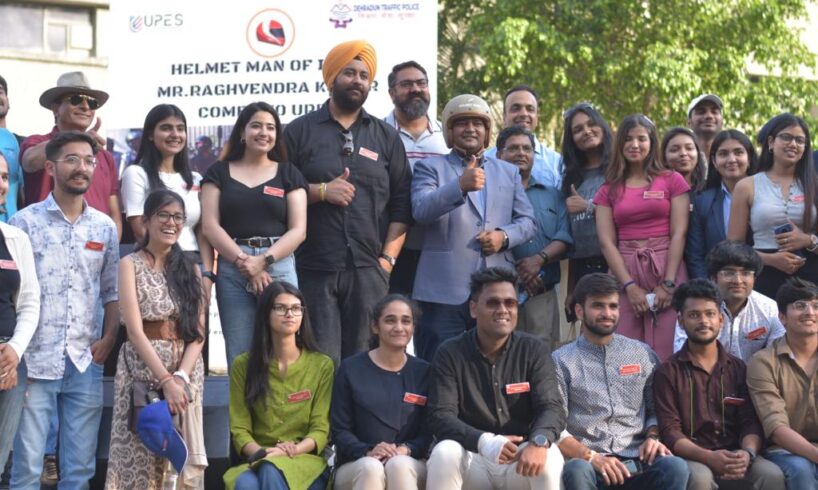 The UPES Student Welfare Department has organized a week-long Road Safety Campaign keeping in mind the safety of the students. The department invited Raghvendra Kumar, popularly known as The Helmet Man of India. Other than him, it invited Akshay Konde, the Superintendent of Police (Traffic) to interact with the students, faculty & staff members.

During his interaction with the students, Raghvendra Kumar shared how he lost a friend to a road accident, as he was not wearing a helmet. He emphasized the importance of following traffic rules and driving safely.

He said, “Deaths due to two-wheeler road accidents have increased in India, most of which are due to head injuries. Wearing helmets is still not considered necessary while driving in India. This makes such awareness campaigns imperative, especially among the young generation.”

His interaction was followed by a nukkad naatak at both the UPES campuses at Bidholi and Kandoli respectively.

In this program, students, volunteers, members of the UPES Student Welfare Department, and local police personnel were involved. They were present at the Prem Nagar police station of Dehradun, at various locations along the 9 km route between Nanda ki Chowki and the UPES Bidholi campus.

The volunteers stopped the defaulters and made them aware of traffic rules. They told them the importance of driving in a disciplined manner. The Helmet Man of India also gifted them with free helmets.

“We at UPES, want to be change-makers”

Speaking about the initiative, Dr. Sunil Rai, VC, UPES said, “Road accidents remain one of the biggest killers of youngsters. This makes road education among students very critical. The health and well-being of our students are of utmost priority to us.”

Dr Nishant Mishra, Dean of Student Welfare & Professor, said “We at UPES wanted to be the change-makers when it came to road safety. Because road safety is equivalent to life safety. No family should lose their loved one because of negligence on the road. We are glad that people are joining us in this endeavour. We will be monitoring results to watch if we attain our ambition of ‘zero accidents”.