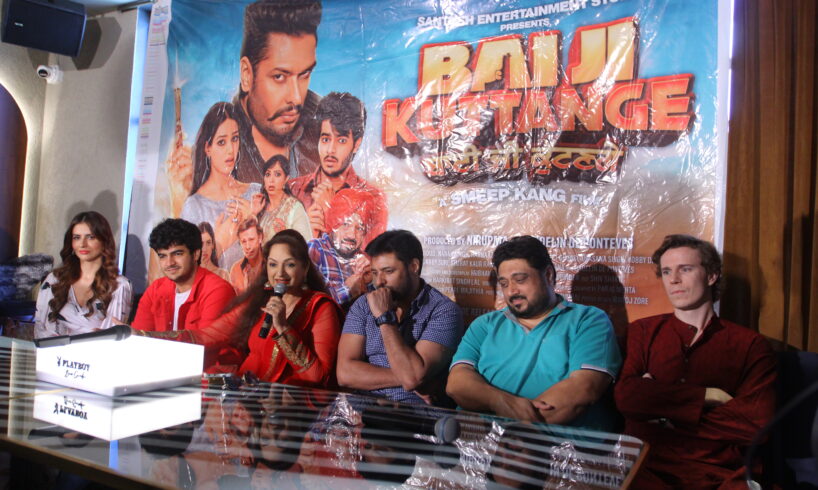 The star cast of the most awaited Pollywood movie of the year, “Bai Ji Kuttange”, reached Ludhiana on Wednesday. One of the most sought-after and experienced actors in the industry,  Upasna Singha has produced the movie. It is to be noted that it is her first movie as a producer. She also visited Ludhiana for the movie promotions and described her journey as a producer.

The movie is filled with some of the most famous names in the Punjabi film industry.

For the first time, you will see Miss Universe Harnaz Sandhu on the big screen. Officially, “Bai Ji Kuttange” is Harnaz Sandhu’s first movie in the Punjabi industry. Other than her, the movie features the action hero of Pollywood, Dev Kharoud. Also, the legendary actor Gurpreet Ghuggi is playing an important role in the film. Through this movie, Upasna Singh’s son Nanak Singh will also make his entry into the Punjabi film industry. Upasana Singh herself will also feature in the movie. Actor Sabby Suri is also playing an important role in the film.

Upasna Singh has described “Bai Ji Kuttange”, as one of the biggest movies of her life. She said that she has put a lot of money on this movie. Also, the audience will see her in a different avatar.

Upasna Singh’s son, Nanak Singh is also making his first appearance in the Pollywood industry through this movie. He said that he has put all his efforts and worked really hard on the movie. Further, he said that though his mother produced the movie, he gave the auditions for the role he was playing.

Punjabi industry’s action king, Dev Kharoud is playing the role of Bai Ji in this movie. He said that this movie is a combination of comedy, romance and action. The audience will definitely like a different look of Dev in the movie.

Sameep Kang, the comic guru of the Punjabi film industry, has directed this movie. He has given some of the best comedy movies to the Punjabi industry, including “Carry on Jatta”.

The movie is all set to hit the theatres on August 19.

Here’s the trailer of the movie