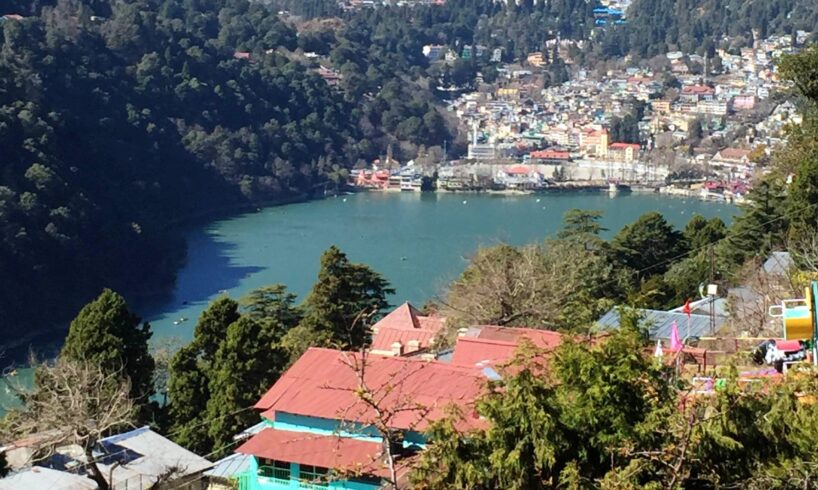 Nainital, also known as the ‘Judicial capital” is the hill station of the Uttrakhand state. It is situated in the Kumaon foothills of the Himalayan region, at an altitude of 1,983 meters above sea level. And is at a distance of 285Km from the state capital Dehradun. The City has situated all-around an Eye – shaped lake called Nainital lake or Naini Lake. The city is also very famous among the tourists for the same.

Now Because it is situated in the Devbhoomi (The Land of Gods) Kumaon foothills, it is well connected to the history of Hinduism. That’s why the moment one reaches the hill station, one can sense and indulge in the spiritual environment of Nainital very easily. It was founded by the Britishers and since then it was among one of the top holiday destinations in India till today. Therefore, Nainital is a commercialized destination and one can enjoy all the activities, a hill station can best provide.

However, the city is a proper tourist destination but people who love adventure and exploring the unexplored raw areas, the small towns like – Ranikhet, Almora, Pangot, which are nearby Nainital will be the best suitable options.

Nainital’s history and how it got its name

According to the Vaishnavas Puranas, Mata Sati (wife of Lord Shiva) went to her father Daksha’s hosted event alone without her husband, where she and her husband Lord Shiva was not invited. The reason for not inviting them was Daksha was not happy with his daughter’s marriage with lord shiva. However, Mata Sati still wanted to go there and attend the event.

When Daksha saw his daughter in the event he took advantage of her and started abusing lord shiva and Mata Sati. However, then Mata Sati didn’t bear the insult of his husband and decided to end her life by jumping into the Yajna’s fire.

When Lord shiva hears about this, he got very angry and started his Tandav (the dance of lord shiva which represents anger and further causes destruction.). He then took the dead body of Sati on his shoulder and continued his tandava. All the Devi & Devtas eventually went to Lord Vishnu to request him to try to calm lord shiva as he can destroy the whole world with his anger. Then Lord Vishnu sent his Sudarshan chakra which cut Mata Sati’s body into 51 parts. Then wherever the parts of the body fell on the ground Is known as Shakti peeths.

The eye or Nain of Sati fell to Nanital’s ground from where it got its name.

4 Topmost places to visit in Nainital :

Naini Lake, also popularly known as Nanital Lake is the major attraction of tourists in the Nainital town. It is also the most visited lake in India. Surrounded by 7 beautiful mountains, chirping birds all around, colourful boats, and a chilled yet pleasant breeze make Nainital an all-time favourite destination for friends, family, and newlywed couples.

How to visit:  1.5 km from Nainital bus stand

Entry fee: – Although visiting and exploring Naini Lake is free, but one can find various opportunities for boating, paddling which will cost around Rs 50 per person.

Located on the Northern side of the Nainital Lake. Naina Devi temple is one of the fifty – shakti peeths (Spots where Mata Sati’s pieces where fell when Lord Vishnu cut her into 51 Pieces) situated in Nainital.

This temple is the main reason behind Nainital’s name.

The two eyes which represent goddess Naina Devi is worshipped which attracts thousands of devotees from near as well as very far places to take the blessings of Mata Naina Devi. Many shops of prasad and pooja items are also available around the temple

How to visit: – Situated on the edge of the Nainital Lake, near the Flatts. It is around 2.5 km from the Bus Stand, Nainital

The Mall Road, now officially named as Govind Ballabh Pant Marg. Is the Main market in the Nainital Town. The mall road was constructed by the Britishers for connected two ends of the town, Mallital and Tallital. Therefore, this road is the busiest in the daytime in the whole Nainital. The road is situated Side – by – Side of the Nainital Lake, and one can enjoy the beautiful view of the lake while walking on the road.

TIP: Visit the road in the evening to get amazing views of the Nainital lake.

How to visit: – The road is parallel to Nainital Lake. And is 1.6 km from the bus stand, Nanital.

Last but not least in our Topmost places to visit in Nainital is the Eco Grave Garden. It is the most different destination one can see in any of the Tourist destinations. The Garden is consists of 6 Naturally Internally Connected caves in the shape of different animals (which you have to pass by climbing and Crawling), a Hanging Garden and a Musical Fountain.

It is the best place for one’s who love adventure.

How to visit: – It is approx. 4 Km from The Bus stand, Nainital.

When to visit Nainital

It is suggested to visit Nainital from March – June in the spring/summer season. That’s because one can easily enjoy the astonishing views of the beautiful Nainital and can easily indulge in all types of activities like from boating in the lake to crawling in the caves of the Eco Cave Gardens.

The remaining seasons (from July – September) this time is of the rains in Nainital and there is big danger od landslides and (October – February) is the time of Heavy snowfall. Undoubtedly, Nainital beauty get enhances at this time but one cannot take part in the outdoor activities and can even explore the town properly. Therefore it is very much advised to skip these both sets of times.

How to reach Nainital

There is no airport available in or near Nainital as the city does not have any air connectivity. However, the only nearest airport near Nainital is the Indira Gandhi International Airport, New Delhi, which is one of the major international airports of India. Various domestic, as well as international flights, are available from here. One can take private taxi’s and buses to reach Nanital after landing at the bus stop.

Kathgodham Railway Station is the nearest railways station to the city. It is around 35 Km from the centre of the town. One can easily get a direct train to the Kathgodham train station. That’s because the station is connected to all the major cities of India including Delhi, Agra, Mumbai, Lucknow. Etc. After exiting the rail station one can take a private taxi or any means of transport to reach the Nainital.

Nainital is connected via excellent condition road to the major cities as well as the small town of the state. One can easily get any type of road transport to visit Nainital. A luxury bus service is also available on the route to the Nainital.

Tip: Taking an overnight bus from Delhi is the most suitable way to reach Nainital.

Since Nainital has various staying options from hostels, PGs, Hotels (from 2star to luxurious 5 stars) and no matter where you stay, you’ll get spectacular views in all the options. But it is suggested to stay near the mall road as it gets very easy to access the hospitals, shops, public transport, etc.

So how’d you like our travel guide on Nainital? Tell us in the comments below!