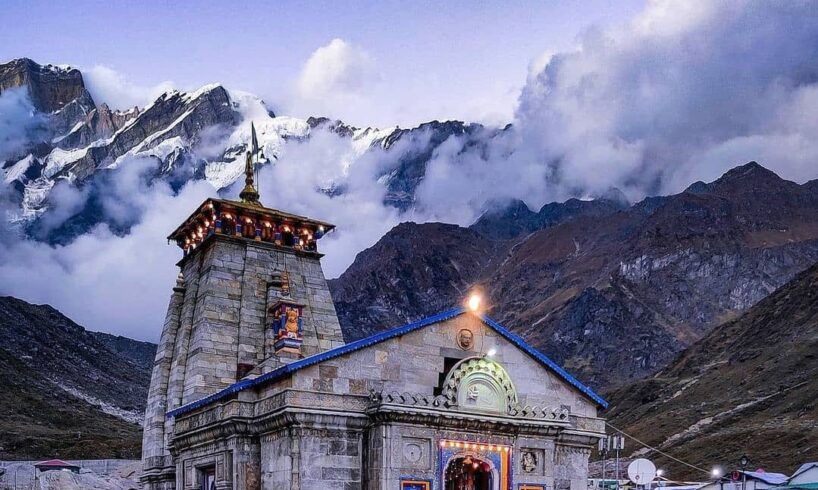 The Kedarnath is one of the holiest cities in Hinduism which is named after The Kedarnath Temple. It is situated at an elevation of 3,583meter above sea level. The Kedarnath Temple is more than 1200 years old and is located in the Garwal region of the Himalayan range, near the Mandakini River in the state of Uttrakhand, India. However, the temple is not directly and easily be reached by road. That’s because one has to trek a 22 Km uphill route from Gauri Kund to reach here.

The temple is highest Highest among all the 12 other Jyotirlingas and is in the middle of massive Himalayan mountains which seems like Big Guardians of the Temple and the whole Kedarnath Valley. Kedarnath Temple is one of the parts of the famous Char Dham yatra.

How Kedarnath Got Its Name

The Word Kedarnah was derived from the Sanskrit words – kedara (“field”) and the Natha (“lord”). The Combination of both the words means “ Lord of the Fields”. Concerning this word, there is a text in Sanskrit “Kashi Kedara Mahatmya” which tells the actual meaning and purpose of Kedarnath. The Text Means – “the crop of liberation” or the place where the crop of liberation is grown.

The Story of Kedarnath starts with the Pandavas. When Pandavas won the battle of Mahabharat, they were happy but at the same time, they were very sad because they have killed so many people. They then wanted to pray to the Lord and ask for forgiveness. Accordingly to one of the renowned Saint of those times, they visited Kedarnath valley via Haridwar and did Penance (Tapasya) for lord Shiva and established a Jyotirlinga. After This, the Pandavas were blessed by the appearance of the lord shiva in front of them. This was how the Kedarnath Temple Came into existence.

However, In the year 2013, a tragic thing happened in Kedarnath Valley. A sudden cloud – burst resulted in a devastating tsunami which worst hit the Kedarnath town. The incident is considered as the worst Natural disaster happened since 2004.

The destruction was so massive at that time, thousands of people died and tons of people went missing. Many rescue teams were deployed and were trying harder and harder to save as many people as they can. This Incident attracted eyeballs all around the world.

The incident was so tragic and mind-numbing that Bollywood thought to make a film n it and pay the tribute to the lost lives. Then in 2018, a movie was made featuring Late Sushant Singh Rajput which told the story of the incident by virtually recreating it to the whole world.

But At the time of the Incident, one Great thing happened.

A Big Tree Trunk gets stuck between the 2 rocks, resulting in the diverting heavy tsunami pressure sideways which eventually saved The Kedarnath Temple. Was it a coincidence or a miracle by god himself?

The 1st place on your list when you are in Kedarnath should be the place the city known for and where visiting is a form of a blessing – The Kedarnath temple.

Build by the Greatest scholar and philosophies of Hinduism, Adi Shankracharya. The Temple is dedicated to Lord Shiva and is one of the jyotirlingas out of the 12 lingas in the country. The Kedarnath Temple is also one of 275 Paadal Petra Sthalams (The most Powerfull Temple of Lord Shiva all over the world).

Situated at a height of 3,580meters and surrounded by the mighty snow-scrapped mountains of the Himalayan range, The temple seems the Heaven of the Earth where the lord lives. One can feel a highly spiritual aura at and near the temple. The temple alone attracts tons of visitors both domestic and International every year.

How to visit: – One has to Trek about 16 Kms uphill to reach The temple, from Gaurikund Rudraprayag.

Exploration Time: – 5 Hrs (Including the time of Trekking)

The Bhairav Temple or The Bhairavnath Temple is a very powerful temple of Lord Kala bhairava or Kalbhairava (who is the fierce form of Lord Shiva and is associated with Destruction). It is said that Lord bhairav is the guardian of the Kedarnath Dham and the whole Kedarnath valley. And it is also said that in the winter season, at the time of heavy snowfall it is the Lord kalbhairava who protects the Dham and the valley. There fore to honour him the temple was built.

The Temple is located at the southern side of the Kedarnath temple on the edge of an eastern hill. The temple is without any roof which further enhances its beauty.

How to visit: – The temple is about 0.9 km uphill from the Kedarnath Dham and one have to trek to reach here.

Timings: – There are no Gates and roofs of the temple, Hence no limited timing.

3. Rudra Cave or The Dhyan Gufa

The Rudra Cave is the underground Meditation cave that offers an Intense peaceful and Spiritual environment for meditation activities near the holy Kedarnath Dham. However, The Cave was built by Garhwal Mandal Vikas Nigam and Nehru Mountaineering Institute. It is located at the other end of the Mandakini River.

However, It is the same place where India’s honourable Prime Minister Mr Narender D. Modi sat in the state of deep meditation and whose pictures got very viral.

This Temple is dedicated to the wife of Lord Shiva, Goddess Gauri or also Known as Mata Parvati. Accordingly to the holy history books of Hinduism. It is said that at this place, Mata Parvati did penance (Tapasya) which included Harded Yoga practices and ascetic to win Lord shiva’s Heart.

The Temple is situated in the Gauri Kund at a height of 1982 meters. And it is the starting point of the trek to the Kedarnath Dham. The Dham is around 22 Km uphill from the Gauri Kund.

How to visit: – In Gaurikund, Enroute Kedarnath Temple.

When to visit Kedarnath

On the other hand in the winters, the temperature can get as low as -20 degree celsius which make conditions favourable for heavy snowfall. On this day the land of Kedarnath is covered by multiple feet of snow which looks very beautiful. But the gates of the temple are closed in the entire season and it is not advised to trek these days. So there is no worth visiting Kedarnath when the temple is closed.

Hence, both the season period (July – September) and (October – March) are not the best times to visit Kedarnath.

How to reach Kedarnath

The Jolly Grant Airport of Dehradun is the closest airport to Kedarnath with a total distance of 240 Km. The airport is one of the major operational airports in the country.

One can easily find taxis and buses from Dehradun to Gauri Kund, after exiting the airport

Rishikesh Railway Station is the closest railway station to Kedarnath. But one has to travel around 210 Km from Rishikesh to Gauri Kund by road. And then 15 Km on foot from Gaurikund to reach Kedarnath Dham.

Gaurikund (starting point of Kedarnath Trek) is well connected by road with the major cities of Uttarakhand like – Rishikesh, Haridwar, Kotdwar, etc as well as with the Country’s capital Delhi. The conditions of roads are very good both in the Plain and the Hilly areas.

One can choose between plenty of buses options like – Ac, Non Ac, Volvo luxury buses and the Uttrakhand local buses. Taxi service is also very easily available on this route and one can also choose to take their private vehicle for the journey.

Since Kedarnath is one of the holiest and important places in Hinduism, It is very much commercialized at both places – Near the Kedarnath Temple as well as the starting point of the trek, The Gauri Kund.

One can find various accommodation options from budget-friendly PGs, hostels, to luxurious hotels. However, Kedarnath offers various budget-friendly ashrams, all thanks to its holy nature. But one has to book the rooms in the ashrams in the advance in the peak season, as the rooms get full very quickly at this time.

So how’d  you like our travel guide on Kdarnath?  Tell us in the comments below!

Also Read: Auli – A City known for its Sking Activities