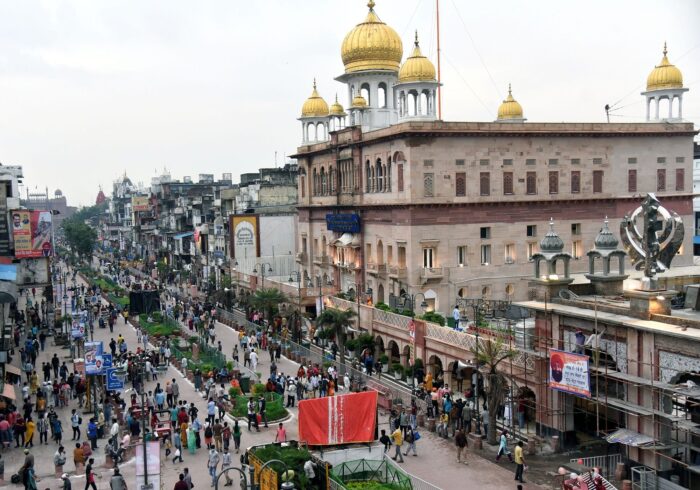 Chandni Chowk is one of the most iconic and oldest markets in the national capital. All of us know that the National Capital Region has a rich history. Several empires have ruled over it and the essence of each of them can be witnessed easily, even today.

The Mughals ruled Delhi for a long period of time and you will get a clear idea of it in Old Delhi. Chandni Chowk is a beautiful example of it. The market is not only famous in India but in different parts of the world. You might know Chandni Chowk as a shopping hub, but the history tells a lot about this place. Today, it is one of the busiest markets in Delhi.

As per several reports, Chandni Chowk and the surrounding area were established in the 17th century. Since then, the place has seen thousands of changes. Undoubtedly, it is not as it was back then. However, the people have worked beautifully to maintain and protect the heritage of the area.

In Old Delhi, especially in the Chandni Chowk area, you will feel connected to the history of the area.

As per a report by BBC, Mughal Emperor Shah Jahan’s favourite daughter Jahanara Begum established Chandni Chowk in the year 1650. It used to be a 100×100 yards area. We recall it as a general area these days. However, it was divided into three different sections- Urdu Bazar, Jauhri or Ashrafi Bazar, and the Chandni Chowk.

Chandni Chowk- the name itself refers to a half-moon-shaped square which had a pool of water once. Some reports also suggest that the pool was replaced with clock tower in the 1950s.

The Mughal imperial processions also reportedly passed through Chandni Chowk. Though a lot of Mughal influence is seen in Chandni Chowk, there are historical places in the Chandni Chowk area that are important to people following religions like Sikhism and Jainism.

This temple is one of the oldest in Delhi. It was also built during Shah Jahan’s era. Right in front of Red Fort, you will find Digambar Jain Lal Temple.

The Mughal emperor Shah Jahan invited Jain Seth several times to visit the city and gave him some land south of Chandani Chowk around Dariba Gali. Shah Jahan also allowed them to build a temporary structure to house a Jain temple.

The Jain community acquired three marble idols installed by Jivaraj Papiwal under the supervision of Bhritraka Jinchandra in Samvat 1548 for the temple. The temple management also runs a charitable hospital for birds. Some reports also suggest that it was also called Urdu Mandir during the Mughal era.

The beauty of Chandni Chowk is that you will find mosques, temples, churches, and Gurudwaras here. The Central Baptist Church was established in the year 1860. Initially, it was formed near the Red Fort. However, during the 1857 freedom struggle, it was reportedly damaged. The main attraction point of the Church is that the Bible verses here, are written in the Urdu language.

It is considered one of the nine historical gurudwaras of Delhi. This was the place where Sri Guru Teg Bahadur sacrificed his life. The Mughal forces beheaded him in the year 1675. It is to be noted that Guru Teg Bahadur is called “Hind Di Chadar” or “Shield of India”. In 1783, Baghel Singh established Gurudwara Sis Ganj, remembering the sacrifice of Guru Sahib.

According to the reports, the tree under which Guru Sahib was beheaded, is still persevered. Along with that, the well from which Guru took bath while he was prisoned, is also preserved.

The place is not even visible from afar. On top of the building, Lloyd’s Bank is written. The condition of the building is pitiable these days, which is tarnishing its historicity.

Historians tell that Begum Samru was a girl born in the house of a dancer whose initial name was Farzana. She married Walter Reinhard Sombre, a European soldier who fought in Delhi. Who, being against the British, participated in many wars on behalf of the Jats and later the Mughals.

In 1776, the Mughal emperor Shah Alam II granted the jagir of Sardhana to Sombre by giving him a royal Sanad. After which Farzana’s name became Samru Begum.

After Reinhardt’s death in 1778, Farzana held the jagir of Sardhana for 58 years as Begum Samru. During this time, she got the building constructed. She also adopted Catholicism and changed her name to Joanna.

As of today, Chandni Chowk has become a commercial centre. The place that is holding a unique historical story, has now become a crowded market. However, the beauty is that people still tried to maintain the heritage and the sanctity of many historical places in the Chandni Chowk area.