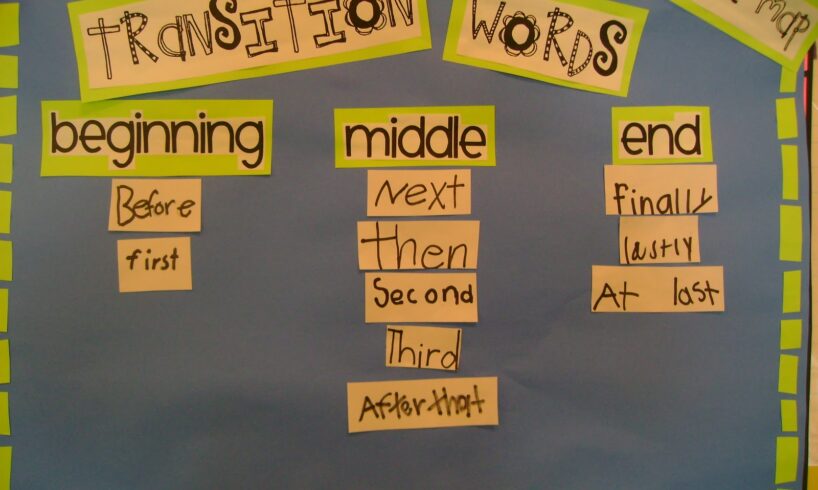 What are transition words?

Transition words are words like ‘and’, ‘but’, ‘so’ and ‘because’. They show your reader the relationship between phrases, sentences, or even paragraphs.

Why to use Transition words?

When you use them, you make it easier for your readers to understand how your thoughts and ideas are connected. What is more, they prepare your reader for what’s coming.

I pushed the domino. As a result, it fell over.

When you start a sentence with ‘as a result’, your reader will immediately know two things:

By using the phrase ‘as a result’ here, you show that the two separate sentences are part of one process. Without having even read the rest of the sentence, your reader can already guess what’s coming. In a way, transition words are the glue that holds your text together. Without them, your text is a collection of sentences. With them, the individual parts come together to form one whole.

Transition words don’t always have to be placed at the beginning of a sentence. Consider the following examples.

He’s a very nice guy. He took us out to dinner yesterday, for instance.

In this example, ‘for instance’ is placed at the end of the sentence. Nonetheless, it still provides the reader with information as to how the two sentences are related.

I enjoy his company because he always tells interesting stories.

In this example, ‘because’ doesn’t connect two sentences, but two clauses. Transition words can connect anything from short phrases to entire paragraphs.

Exploring with an example

Let’s use a more concrete example. Below, you see Text A and Text B. Text A contains no transition words. On the surface, Text B is the exact same, only we’ve added transition words to make it easier to read.

Text A
I’m going to discuss a few reasons why practice is important to learning skills. The only way to truly master a skill is by actually doing what you’ll have to do in the real world. I think practice can be a fun way of putting in the necessary hours. There are some people who will disagree. It is said that people tend to remember only 10-20% of what they’ve heard or read. That number rises to as much as 90% when you put theory to practice. Following up explanation with practice is key to mastering a skill.

Text B
In this paragraph, I’m going to discuss a few reasons why practice is important to mastering skills. Firstly, the only way to truly learn a skill is by actually doing what you’ll have to do in the real world.

Secondly, I think practice can be a fun way of putting in the necessary hours. There are, however, some people who will disagree.

Thirdly, and most importantly, it is said that people tend to remember only 10-20% of what they read or hear. Moreover, that number rises to as much as 90% when you put theory to practice. In conclusion, following up explanation with practice is key to mastering a skill.

Text A is not a terrible paragraph. However, the differences are clear as day. Text B does a better job of showing there are three separate arguments to support the statement with a definite conclusion.

The reader never has to wonder whether a sentence still belongs to the previous argument or a new one. Moreover, it even shows the relationship between sentences within one argument. Therefore, people are going to find it easier to read this text and will stay on the page longer. And this is just one short, conveniently arranged paragraph!

Transition words can be divided into several categories, based on the type of transition you want to make. There are often several words available for one transition. Sometimes they mean exactly the same, sometimes there are slight differences. If you’re not a native speaker or struggle with language in general, you’ll have to study and practice their use so that you can make better choices.

See the list below for examples of transition words in English.