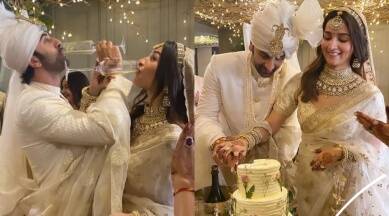 A much-awaited wedding, for which fans were waiting for a long time has come now, the news got to hustle in the entertainment market, as the two stars finally got married.
The couple tied the knot in presence of their family members and close friends in Mumbai on April 14.

Alia Bhatt and Ranbir Kapoor got married in a low-key ceremony at their residence in Pali Hill (Vastu)  on Thursday afternoon.

Their pre-wedding festivities began on Wednesday, April 1, with a sangeet and Mehendi ceremony.
While Alia and Ranbir did not get a spot.  Neetu Kapoor, her daughter Riddhima, Karisma Kapoor, and Kareena Kapoor Khan were photographed heading to Ranbir’s house for the celebration.

Beginning of all this – Alia and Ranbir began dating five years ago, with Ayan Mukerji’s film Brahmastra bringing them closer.

Some Facts of Ranbir Alia Wedding –

– The couple’s wedding is taking place just a few days before the second death anniversary of      Ranbir’s father Rishi Kapoor. – Mahesh Bhatt gets Alia and Ranbir’s name on his palm with Mehendi
– Neetu Kapoor confirms ‘no reception’ for Ranbir Kapoor, Alia Bhatt
– Ranbir carried Alia in his arms.

We wish the couple a happy fat married life.

Also read, 10 interesting facts you need to know about Vicky and Katrina’s wedding