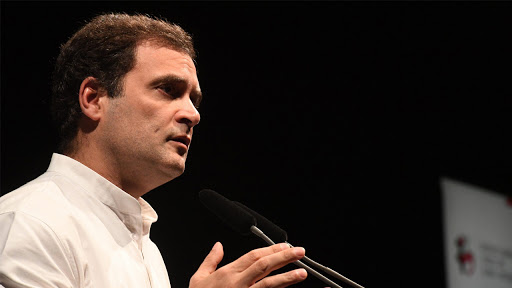 The only thing more dangerous than ignorance is arrogance: Albert Einstein

Rahul Gandhi said on Twitter “This lockdown proves that: “The only thing more dangerous than ignorance is arrogance.” Albert Einstein,”.

Rahul Gandhi also posted a graph along with his tweet. In which he shows the state of the economy and the number of fatalities at the start of March. The drastic fall in the economy and high rise in fatalities during the lockdown period has shown in the live graph.

The graph also shows Govt of India, Google Mobility and AICC data as the source of this data.

Rahul Gandhi has been attacking the government over the Covid-19 situation. He also accused it of imposing a hard lockdown on the country and severely affecting the economy of India.

Rahul Gandhi also has been holding discussions with many public intellectuals and policymakers on this issue. In all the discussions, the central theme revolves around the state of the economy during the Covid-19. Some of the intellectuals, with whom Rahul Gandhi has been so far spoken to, are former industrialist Rajiv Bajaj, RBI governor Raghuram Rajan, Harvard professor Ashish Jha, Swedish physician Johan Giesecke, and Nobel laureate Abhijit Banerjee.

He has talked about the measures adopted by the government and how other countries are dealing with the crisis, during all the discussions.

And last week, he also targeted the government with an improvised version of Urdu poet Mirza Ghalib’s creation. “Everyone knows the reality of ‘Seema’ (border) but to keep the heart happy, ‘Shah-yad’ it is a good idea,” Rahul Gandhi tweeted sarcastically in Hindi along with the photo of Union home minister Amit Shah.