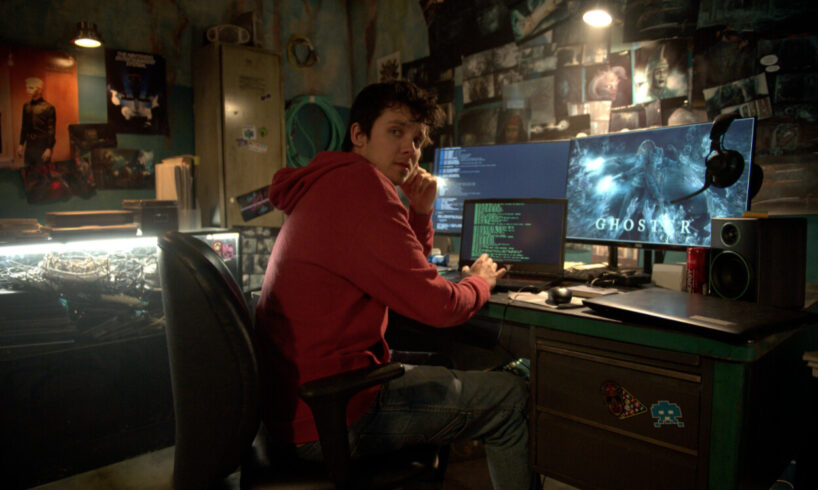 Despite a promising premise, Netflix‘s latest horror offering falls flat in almost every way. There is an attempt to make the horror film, as well as the reality in which it is set, stand out in order to entice viewers to continue being transported into the story.

Choose or Die is the type of horror that has a logical-defying reality found in the aforementioned Final Destination films, the Saw franchise, and the many copycat horror films that follow a group of people haunted by something that requires intelligence and luck to escape.

Unfortunately, Choose or Die, like so many others before it, forgets to be a movie that can stand on its own and is instead consumed by the possibility of becoming a franchise.

After firing up a lost 80s survival horror game, a young coder unleashes a hidden curse. She now has to make terrifying decisions and face deadly consequences.

Choose or Die assumes that the only things that catch people’s attention are gore and violence. There isn’t enough suspense, drive, or intrigue to keep the audience interested in between the terrifying moments.

There is an element of mystery in films like Final Destination, The Ring, Unfriended, and Pulse, which is why they are either revered or passable. The protagonists are attempting to end their torment, and in order for this to be engaging, the central villain or evil presence must be wrapped up in an intriguing story.

Choose or Die is too muddled in that regard, and it feels so much like a mash-up of films that it loses the thread far too frequently.

It also does not help that we are reminded of better horror with the presence of Nightmare on Elm Street’s Robert Englund.

Choose or Die is overly reliant on the premise is interesting, but the execution is tedious. All of the questions and answers seem secondary to the shock and horror of the game’s violence. Competent filmmaking is difficult to appreciate when the film ignores the fundamentals of its story.

On a technical level, the film is satisfactory. But there isn’t much to engage with if there isn’t a substantial story, layered or interesting characters, and a working internal logic.

What Choose or Die lacks in length, it makes up for with a short runtime and good pacing, which is enough to recommend the film.

The direction of the Film

Toby Meakins’ feature film debut comes after years of directing short films, and his talent shines through. Choose or Die is a beautifully shot film with a vibrant color palette. There are some tonal balance issues, where the lighter moments really clash with the darker feel of the rest of the film, but nothing major.

Meakins has a good eye, and his future looks promising. Liam Howlett’s score for Prodigy also packs a punch. There’s this fantastic use of old video game noises combined with drones and industrial sounds.

Iola Evans shines as Kayla, a programmer who had a difficult childhood and is now tormented by the mysterious game Curs>r. Every time she appears on screen, she dazzles. Asa Butterfield plays her friend Isaac, and he doesn’t get enough screen time. Though his character provides some of the more amusing moments, they don’t happen nearly enough.

They’re on a mission to learn more about the video game that’s wrecking Kayla’s life. While the concept is intriguing, the characters aren’t compelling enough to make you concerned about their safety.

In the end, however, the film is unable to overcome the sense of silliness it so desperately attempts to avoid. There are echoes of a good horror film here, but they are overshadowed by a dreariness that stifles any creativity or individualism this story might have. Choose or Die will appeal to those who are new to the genre or simply want to unwind for a while. However, for true horror fans, the derivativeness and flatness of the execution are too much to tolerate.

We hope your liked Choose or Die review, kindly suggest your view in comment box