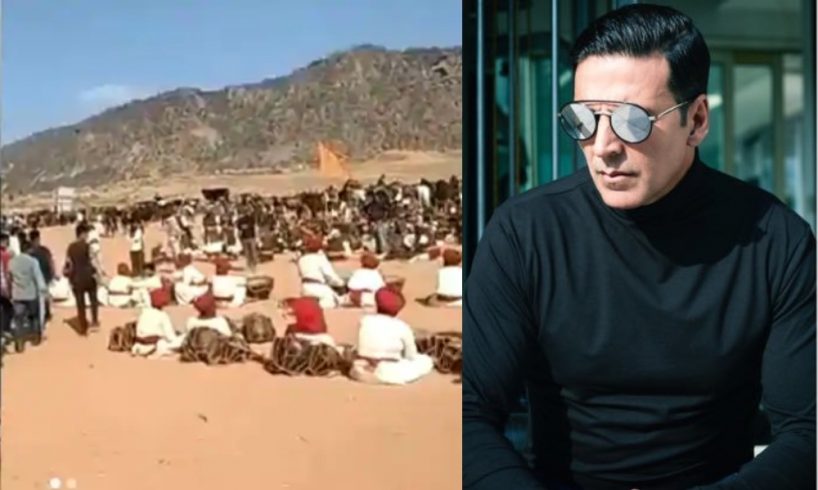 Akshay Kumar is in full form and the actor is signing films one after the other. Just after the release of the crazy goof-up Good Newzz, Kumar came up with Sooryavanshi but the release of the film was initially stopped due to the Coronavirus outbreak. Meanwhile, the actor continued to shoot for his next film titled Prithviraj with Manushi Chillar.

However, while the Makers of Prithviraj were shooting the film, few members of the radical outfit, “Karni Sena protests” on the shooting site. The outfit demanded a written assurance from the director that the makers are not tempering with the real historical facts.

A video that went viral on the social media shows the leader of the outfit Mahipal Singh Makrana peacefully conversing with Chandra Prakash, the director of Prithviraj. As “Karni Sena protests” at the set, Mahipal is seen telling the director that they were talking with them peacefully because they respect Akshay Kumar for his film choice and good deeds. He is seen asking the director that they require a written assurance that the film does not manipulate the actual historical facts of one of the celebrated warriors of the country.

The film Prithviraj is backed by Yash Raj Films. The story of the film revolves around Chauhan dynasty king who ruled the major parts of North-western India like Rajasthan, Haryana, Uttar Pradesh, a few parts of Punjab, Madhya Pradesh and Delhi. Prithviraj is expected to hit the silver screen on the occasion of Diwali this year.

The “Karni Sena protests” on the set of the film as they fear that the makers might manipulate the facts of the historic warrior in order to make it more creative. They urged that the warriors mustn’t be shown as a lover but a king only.

After a conversation that took place between the director the chief of the outfit, Chandra assured Makrana that no tampering will be done with the historic facts but however the outfit still requires a written assurance.