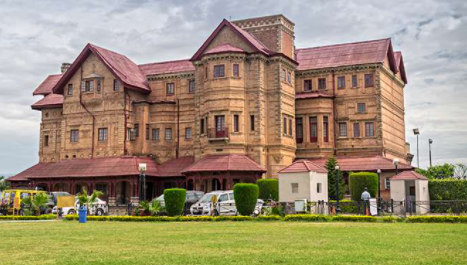 The most prestigious architecture has a fascinating backstory that deserves to be told. And this story is of Amar Mahal Palace. It is the most exquisite art of Jammu. In the year 1862, the French architects sketched it. For tourists, the palace is a sight to behold. The French architects built this structure for Raja Amar Singh, the Dogra king. The magnificent structure distinguishes itself from the other palaces of the Dogra kings.

The Tavi River surrounds the Amar Mahal Palace. The sounds of the river soothe your soul and mind, which adds to the beauty of the location. On the other side, you will see the mesmerizing Shivalik range. It is conveniently located in the heart of the city, adjacent to the heritage hotel known as the Hari Niwas Hotel, on the road to Kashmir.

Transformation of the Palace into a museum

After the death of Maharani Tara Devi in 1967, her son Karan Singh and his wife Yasho Rajya Lakshmi transform this palace into a museum. Former

This museum’s goal is to preserve some of the rarest forms of art and literature, and they collaborate with other fine arts institutions to promote Indian art and culture. In honour of his parents, they transfer this regal property to a trust and name it the Hari Tara charitable trust.

Located on the top of a hill, the Dogra king Amar Singh built it in the year 1862. Now, The authorities have converted four of the palace’s rooms into galleries and historic museums.

The Trust also hosts scholarly exchanges, workshops, and exhibitions on a regular basis. “The overall effect is to transport one into a fascinating miniature world with its own aura and ethos,” says Karan Singh.

The architecture of the Palace

The palace is built in the European castle style, with sloping roofs, turrets, and tall towers. During the reign of Raja Amar Singh, Amar Mahal Palace was the tallest building in Jammu.

Sloping corrugated tin roofs cover the long passages on three sides of the imposing structure. The first floor of the palace building has French windows and a balcony connected to it. On the top floor, you will find a bay window. In the windows, the architects have depicted triangular projections in classical Greek architectural style.

An impressive showcase of Art

• The art collection here is also quite impressive, with paintings by M F Hussain and Laxman Pai, among other famous Indian contemporary painters, on display.

Another intriguing feature is the Pahari Paintings displayed here, which depict stories from the Mahabharata and other folklore, particularly those of Nal Damyanti.
The red sandstone gives the palace a beautiful view, making it the best destination for visitors to celebrate holidays.