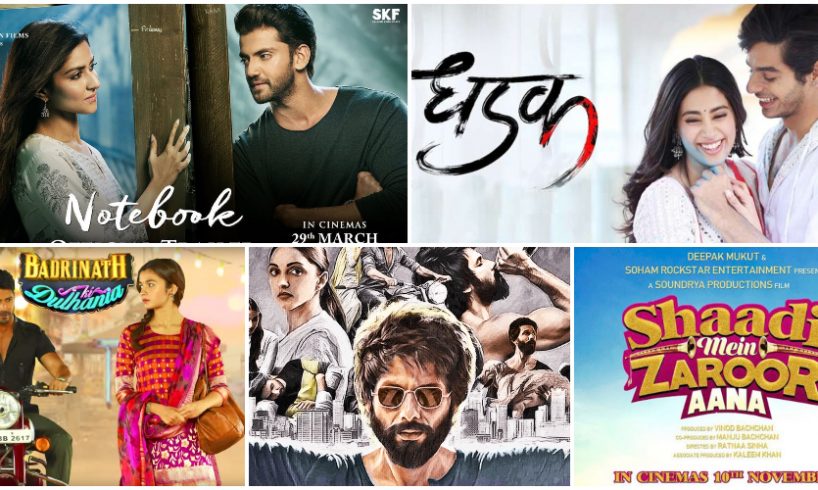 Bollywood: We understand how difficult it is for you all to find out ways to pass your time during this quarantine but being safe is also important owing to the situations occurring due to Coronavirus. If you love watching movies and you don’t have any good movie telecasting on the television, here is a list of 5 romantic Bollywood movies.

These Bollywood movies explore the romantic genre in their own manner and will definitely make your heart melt:

Set in the backdrop of a cute love story, the film stars Kirti Kharbanda and Rajkummar Rao in the lead parallels. However, the film beautifully unfolds many aspects faced by the young couples in terms of marriage, dowry, insecurities, family differences and societal thinking of working women. It carries all sorts of emotions altogether and manages to grab the audience’s attention in no time.

The film has got some beautiful songs that can easily make it to your playlist. The love story revolves around a man who finds a notebook from the previous instructor of the job he has approached and falls in love with the woman he has never met. The story seems interesting and the film is even more of that. The film is worth watching so we think you take up to this one.

A remake of the Indian Marathi language film and stars Jahnvi Kapoor and Ishaan Khattar in the lead roles. The film focuses on how political families try to destroy teenage love and how youngsters keep it alive. The Ishaan-Jahnvi duo is quite adorable and their screen space is quite appreciated.

The film also shows the struggles of the young couples who strive hard in order to make to the pace of time and understand each other. This one is definitely worth a watch to understand how love actually works out despite all odds.

We don’t think there is anyone in the country who does not find Alia Bhatt and Varun Dhawan’s film and this is definitely worthy of the audience’s watch. The film opens up about the societal norms of women who are not allowed to work after their marriage and the older generation’s parent’s disapproval of love marriages.

The love story of Badri and Vaidehi resolves many issues that become a hurdle on their way to get united and how the couple solves the issues is what the movie basically is about.

We don’t know who in India is not in love with this movie. Kabir Singh is a story of Kabir, a surgeon who performs all of his surgeries in a drunk state. The reason for his alcoholic character is Preeti with whom he fell head-over-heels in love but however, the couple gets separated as Preeti’s parent disapproves of Kabir as their son-in-law.

The story unfolds Kabir’s strong character, how misunderstandings grow and tear the lovers apart, how love changes the behavior of a person and how the sadness of one member of the family destroys the happiness of the others as well.