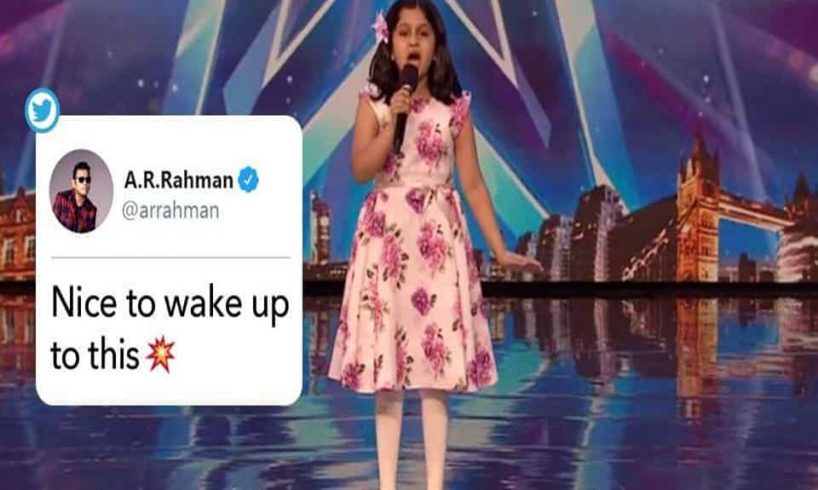 AR Rahman has millions of fans world over. But what if he got impressed with someone’s talent. Yes, the musical maestro is impressed with A 10-year-old girl. This 10- year old girl has impressed AR Rahman with her lovely voice. And there’s also a chance that her mesmerising voice will soothe your soul too.

AR Rahman wrote his experience on his twitter account. As taking to his Twitter account, the musical maestro shared a video of a girl named “Souparnika Nair”. Souparnika Nair showcased her superb singing skills on the stage of Britain’s Got Talent.

“Nice to wake up to this,” AR Rahman shared the video with this caption on Twitter. In this short video, 10-year-old Souparnika Nair starts with The Trolley Song by Judy Garland. But, one of the judges, Simon Cowell, stops her midway and asks her to sing another song to “hear a different part of her voice.”

Simon Cowell asks her to perform the song “Never Enough” from the film The Greatest Showman. And Souparnika Nair performs it in such a way that it earns her a standing ovation from all the four judges and the audience in the studio.

A Twitter user wrote “Wow… what a talent… it’s awesome,” and several others expressed the same notion.

Even one of user expressed his feeling as “Wow… the last time I cried watching music was Lydian playing flight of the bumblebee and then now this. I love it when music gives me goosebumps and makes me literally cry while I am still smiling my heart out. Happy exhilarated tears,”.

Watch the video of this 10-year old girl performance and comment what do you think about the video?