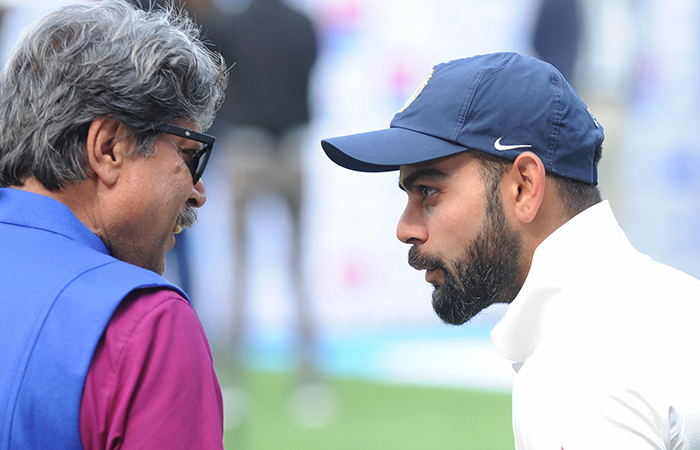 Virat Kohli is already in a list of top batsmen in the world and fans called him legend. But on the last tour to New Zealand was not as good as it should be for Kohli. As Virat Kohli could score only one half-century across 11 innings in the all the three formats and the lack of runs in the Test series was one of the biggest factors behind India’s struggle.

The Indian skipper well targetted by a relentless New Zealand bowling attack as New Zealand’s bowlers kept targeting the off his, her, their, etc. stump to drag him across and then pinned him in front with the ball get his wicket.

“Looking at the performance of the New Zealand tour, former Indian captain Kapil Dev reacted to the players.” Kapil Dev believes that this could be because Kohli’s reflexes and his eyesight might have slowed down and hence, Kohli now needs to go back and practice more against the straight deliveries.

Talking to the ABP News Kapil said “When you reach a certain age, when you cross 30 then it affects your eyesight. In swings, which used to be his strength, he used to flick them four but now he has been dismissed twice.

So I think he needs to adjust his eyesight a bit. When big players start getting bowled or LBW to incoming deliveries then you have to tell them to practice more. It shows that your eyes and your reflexes have slowed down a bit and in no time your strengths turn into your weakness,”.

Kapil Dev further added “From 18-24, your eyesight is at the optimum level but after that, it depends on how you work on it. Sehwag, Dravid, Viv Richards, you name it, all faced similar difficulties in their career. So Kohli needs to practice more.

When your eyesight weakens then you have to tighten up your technique more. The same ball which he used pounce on so quickly, he’s getting late on it now,”.

Kapil, the legendary Indian captain also suggested that with the IPL coming up, Virat Kohli should focus on getting his game back on track. ‘I think IPL will help him. He will start getting the hang of it. He’s a great cricketer, he will definitely realize it himself and make adjustments,’ he added.