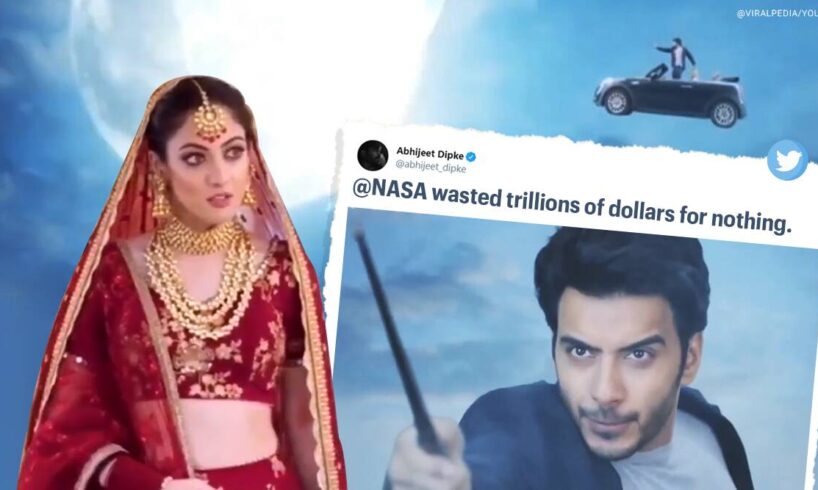 New Delhi: It’s a well-known fact that Indian TV serials have a patchy relationship with sense and logic.

Some of the Indian TV shows are no longer just known for their elaborate and melodramatic themes, of late, some bizarre sequences from hit shows have gone viral with netizens wondering why.

When we watch Gopi Bahu washing a laptop or Simar turning into a ‘makkhi’. We have come across lots of bizarre TV plots and scenes, which has made us both laugh and cringe.

The year 2021 has given yet another epic scene that will make you go ‘Kuch Bhi’. In a logic-defying scene currently going viral, a man is seen (LITERALLY) aiming to break a piece of moon to win over his lady love in ‘chand ka tukda’ challenge. Yes, we are not kidding!

While you must have read the ‘Chand tod laana’ metaphor in various love songs, the bride in the show actually demands it and says whoever manages to get her a piece of the moon will be eligible to marry her. Rising to the challenge, the man identified as Aman, takes the help of a rope to bring a piece of moon to the Earth, while his family members help him out. Turns out, this bizarre scene is from a mythical show Yehh Jadu Hai Jinn Ka that aired from October 2019 to November 2020, on Star Plus.

The scene is from season 2, where show’s protagonist Roshni Ahmed, played by actor Aditi Sharma, arranges for a swayamvar and challenges her suitors to get a piece of the moon.

In another scene, the second suitor goes up in the space in a CAR! When that plan fails, he aims at the moon with some laser-like object, and manages to break a part of it which then falls on the ground

Now, Twitter is overflowing with memes and hilarious comments, while many said they were left speechless. See funny memes: