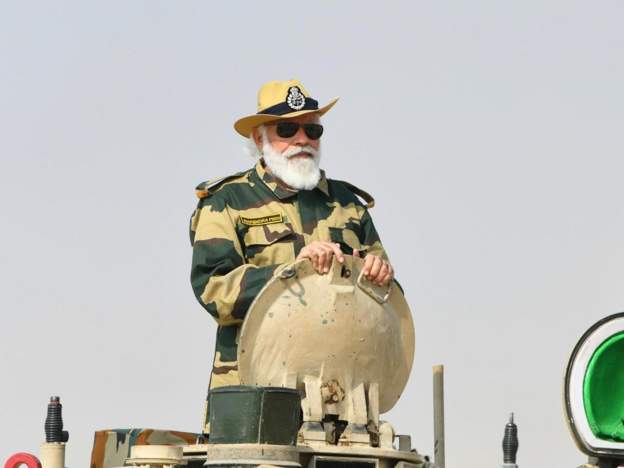 Jaisalmer: PM Narendra Modi, in a subtle but significant swipe at China, has hit out at “expansionist” forces that show a “distorted mindset which belongs to the 18th century”. The Prime Minister warned such forces against taking advantage of India’s tolerance and said the nation’s soldiers would give a “prachand jawab (fierce reply)” if borders were threatened.
“India believes in a policy of understanding and making others understand… but if an attempt to test our resolve is made, then the country will give a fierce reply,” the Prime Minister said Saturday while spending Diwali with soldiers at the strategically key Longewala post in Rajasthan’s Jaisalmer.

PM Modi added “No force in the world can prevent our soldiers from protecting our borders. India has shown it has strength and the political will to give a befitting reply to those challenging it. The world now knows that India will not compromise with its interests even one bit,”.

And, today’s warning is not the first by Prime Minister Modi.

Also, while addressing the Shanghai Cooperation Organisation (SCO), Last week, he called on members (this includes China and Pakistan) to “respect one another’s sovereignty and territorial integrity”.

During a surprise visit to a Ladakh forward post – days after 20 Indian soldiers were killed at Galwan Valley in July – the Prime Minister, without naming China, said: “The age of expansionism is over… History is witness that expansionist forces have either lost or were forced to turn back.”

PM Modi also underscored that India would not stop building roads and bridges in the border area, which is believed to have been the cause of China’s aggression.

And, On that occasion, China responded by calling the comment “groundless and exaggerated”.

All these comments come amid a prolonged stand-off with China at the Ladakh border, where soldiers have been locked in a confrontation at the LAC (Line of Actual Control, the de facto border between the two countries) since skirmishes were reported in the Pangong Lake region in May.

These tensions peaked after the June violence, in which an unspecified number of Chinese troops were also killed. In September, “warning shots” were fired as the two armies came face-to-face at Pangong Tso.

There have been several rounds of military and diplomatic talks since – the eighth was held last week – but the Chinese have refused to adhere to agreements on restoring status quo.

India’s Chief of Defence Staff, General Bipin Rawat, last week, said a “larger conflict” could not be ruled out if unprovoked military actions by the Chinese continued.

Prime Minister Modi’s comment about “expansionist” forces and warning to those threatening the country’s territorial integrity also comes a day after 11 people, including five soldiers, were killed in ceasefire violations by Pakistani troops in several areas of northern J&K.

PM Modi also remembered the Battle of Longewala – an engagement during the 1971 war with Pakistan in which a small contingent of Indian soldiers repelled an attack by a significantly larger Pakistani infantry force backed up by tanks – and paid tribute to the heroic soldiers.

With input from PTI