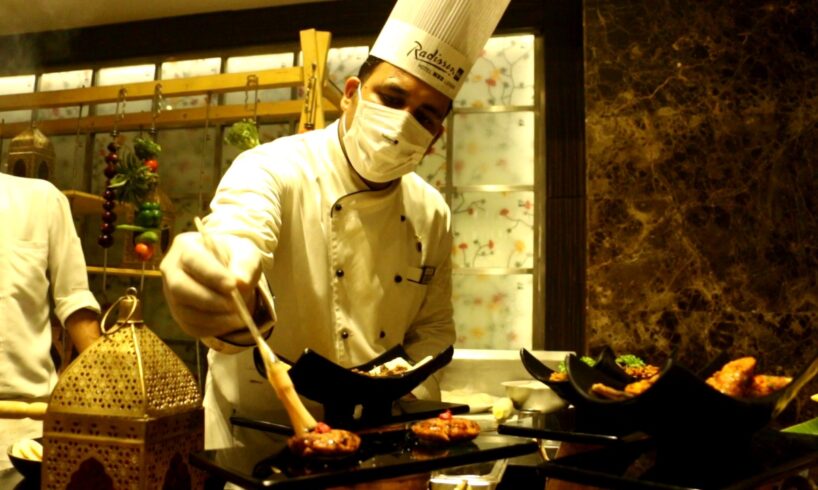 Ludhiana: The feast for Ludhianavis at Cafe Delish restaurant of Radisson Blu Hotel MBD Ludhiana is on with food festival Raddison Roti Pe Boti. The food festival will conclude on August 29th. The main highlight of the festival is a variety of kebabs will be served with particular bread of the respective region. The whole menu has been curated by Executive Chef Raj Kumar and his culinary team. The regions covered in the food fest are Uttar Pradesh, Andhra Pradesh, Kashmir and Rajasthan.

What Senior Chef Said about it

Chef Raj Kumar who worked closely with his culinary team on the menu, acquainted us with the role of spices, tenderising agents and choice of meat in recreating these kebabs. “All the masalas were made the old fashioned way, and that has really enhanced the flavour of our kebabs,” he said. Chef also apprised the guests about the rich history of each kebab so they can relish food and can know about the history of each delicacy.

General Manager of Radisson Blu Hotel MBD Ludhiana, Abhay Kumar said, Roti pe Boti kebab food festival till August 29th at Cafe Delish restaurant is a feast for the Kebab lovers. He said the kebab feast is to tickle the taste buds of guests with delicious cuisines of three regions Uttar Pradesh, Andhra Pradesh, Kashmir and Rajasthan. “In the food festival, we will offer various varieties for both vegetarians as well as non-vegetarian foodies,” he added. He said we can ensure that every guest will be satisfied as well as delighted by the roti pe boti food festival.