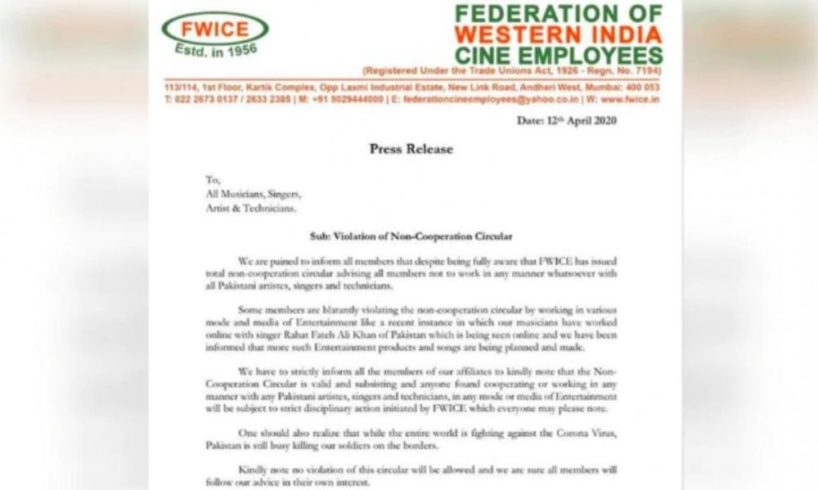 Indian industry: The film body known as the Federation of Western India Cine Employees has issued a warning against the Indian musicians and singers working with Pakistani artists. However, with the warning, the film body has also said that if any artist fails to comply, that would lead to ‘strict disciplinary action’.

The film body issued a letter saying that FWICE has already made clear to its members with the help of a total non-cooperation circulation which speaks not to collaborate with Pakistani singers on any platform. Despite making it clear a hundred times, some members have been blatantly violating the circular.

FWICE had taken this action after the collaboration of Indian artists with Pakistani singer Rahat Fateh Ali Khan came to there notice. The film body also said that Rahat Fateh Ali Khan was not the only instance but they are well aware that many other such kinds of projects and being planned and made.

Further, they warned strictly to all its members that the non-cooperation circular is still valid and that if any tries to stand against it and are found cooperating or working in any manner with the Pakistani artistes, singers, technicians through any mode of media of entertainment will be subject to strict disciplinary action.

The letter also added that citizens must realize that while the entire world is fighting against the coronavirus, Pakistan is still busy killing the Indian soldiers on the borders.

In the end, the letter requested the citizens not to violate the circular and it also said that the members of the affiliates can step into their own interests and projects without any hindrance from their side.

Pakistani artistes were banned to work in India after the attack of Uri 2016 where 18 soldiers were killed and many others were brutally injured.

At that time, there were some films that shot with the Pakistani actors before the ban was issued. After the release of Karan Johar’s Ae Dil Hai Mushkil and Rahul Dholakia’s Raees received widespread criticism and protests for featuring Fawad Khan and Mahira Khan.