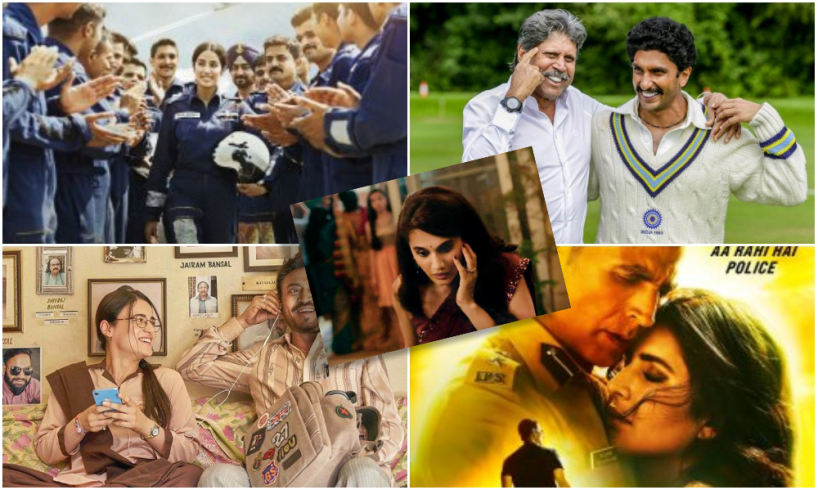 New movies 2020: Bollywood cinema has always challenged itself with a series of amazing scripts, songs, cinematography and what not. Bollywood is an industry that gave us projects like 3 Idiots, PK, Kahaani, Holiday, Special 26 and many more. There is an infinite number of movies in Bollywood that are worth watching and there will be many more such films getting all over the nation.

Well, 2020 has just begun and we are waiting for some amazing films to release. Here are the films going to release in 2020 those would definitely get straight to our hearts. Whether from a genre like comedy, biography or action, the talks of these new movies are going on all over the Internet.

83 movie stars Ranveer Singh as Cricket superstar Kapil Dev and Deepika Padukone as Romi Dev, Kapil’s wife is going to theatrically release on April 10 this year. 83 movie is a multi-star movie that revolves around the life story of Kapil Dev who brought pride to India after winning world cup 1983. A worth watch to relive the proud moment and feel nostalgic.

The second installment of the film Hindi Medium, Angrezi medium stars Irrfan Khan as the male protagonist is a story of a father who has gone beyond his limits to fulfill his daughter’s dream of going abroad to study further. Irrfan Khan’s next will be an aspirational comedy that would surely attract the audience. The movie stars Radhika Madan as Irrfan Khan’s on-screen and Kareena Kapoor Khan as well and is going to release on March 20 amid the Coronavirus scare.

Thappad is the story of Taapsee Pannu who as a housewife gives a hundred percent to her husband but receives nothing but zero efforts in return. The film revolves around a simple concept of Just A Slap. As Taapsee’s on-screen husband slaps her and she is criticized by everyone for making a mountain out of a molehill. The film is appreciated by the critics and the audience so far and has already hit the silver screens on February 28. This new movie is worth a watch.

The fourth installation to the Shetty Cop Universe movies, Sooryavanshi stars Bollywood Khiladi Akshay Kumar with his ladylove Katrina Kaif. The film is based on the old concept of terrorists attacking the country and police coming to save its people. But as far as Sooryavanshi trailer is concerned, the film has very beautifully portrayed. The movie is also expected to release amid the Coronavirus scare that is on March 27 this year.

Based on the life story of the first IAF Pilot Gunjan Saxena, who is also known as the Kargil girl. The movie also stars Pankaj Tripathi and Angad Bedi. The poster of the film has received positive feedback so far and the film is expected to release on April 24 this year.