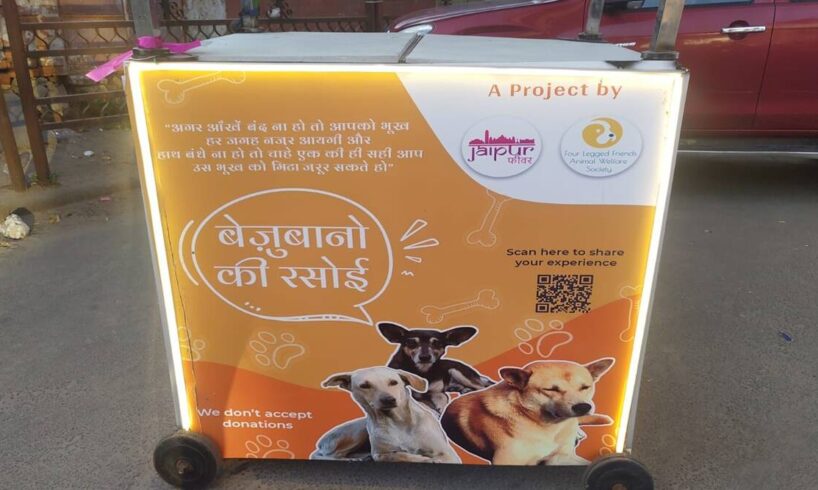 Gajraj Singh Kachhawa, a Jaipur resident, has come up with a noble initiative for our furry friends. He has initiated a stall named “Bezubano ki Rasoi”. Gajraj who initiated this stall, says that this idea came to his mind while having tea at a tea stall.

Gajraj says, “I have been feeding dogs in my own capacity for over five years now. When the lockdown was imposed there were so many people who were supplying food for others. However, the street dogs suffered the most. No one was willing to feed them or even care for them. That was when I started a concerted effort towards feeding the dogs.”

Gajraj observes a man who purchased biscuits for street dogs. He immediately suggests to the man that wheat and sugar are not good for dogs. He urges the man to give him milk instead of biscuits. The man replied, “The only thing I will get for Rs 5 is this packet of biscuits.” This was the thought that lead him to start this noble initiative.

This idea stayed with Gajraj, who went on to found “Bezubano Ki Rasoi” (Kitchen for the Voiceless). At his stall, a pre-packaged nutritious meal for a dog costs only Rs 5.

The 27-year-old entrepreneur and digital marketer own a club in Jaipur where Bezubano Ki Rasoi operates. “Because the club opens in the evenings only, I could use the kitchen to prepare these healthy meals during the day.”

“It was a win-win situation for me because I didn’t have to make any additional investments,” he explains.

When Gajraj started this initiative, he did not want to charge for the food. However, he says that his friends urged him to charge a nominal amount. “I was told that no one would value what I was doing if I were to not charge for it. So, after the biscuit incident, I started charging Rs 5.”

Location of the stall

Once the meals are prepared and packed they are sold through a stall that is set up near Vivek Vihar metro station in Jaipur. They are now selling over 500 packets of food each day.

Gajraj says we now have many regular clients who serve their dogs the food we make. “Most of them come back and tell us how much their dogs seemed to enjoy this freshly cooked meal as compared to pre-packed pellets they were fed earlier,”.

According to Gajraj, the plan for Bezubano Ki Rasoi is to open five more counters across Jaipur in order to feed a minimum of 3,000 dogs each day.

“We do not accept any donations from individuals and rely solely on self-funding and the proceeds from the sale of meal packets.”

“While the dogs usually eat whatever they are given,” says Priyanka Sharma, a Jaipur resident who has been feeding stray dogs for a while, “I saw the difference when I fed them one of the packets I bought from Bezubano Ki Rasoi.”

She continues, “For the amount of money they charge per packet, I am sure that nothing else will come close to being pocket friendly and nutritious at the same time.”

Priyanka has purchased over 60 packets from Gajraj and says that she cannot recommend it enough to all those who stop to feed dogs on the streets.