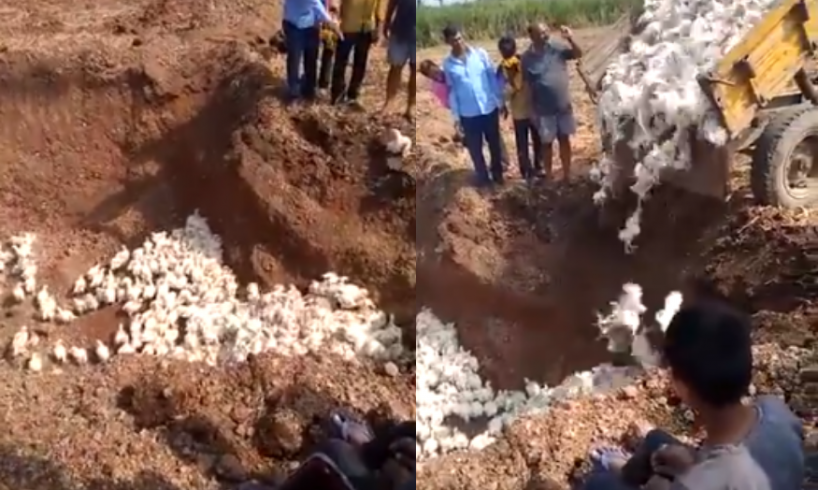 Karnataka: Amidst the Coronavirus scare that is spreading all over the world rapidly, a Karnataka based poultry farmer buried thousands of alive chickens in order to avoid the spread of this dangerous virus.

A Twitter user shared a shocking video of the incident where a truck is seen unloading the chickens inside a large pit. As shared by the Twitter user named Niranjan Kaggere, the incident took place in Lolasoora village in Gokak, Belagavi. The farmer Nazeer Makandar took this step to avoid the Coronavirus spread.

Here have a look at the Tweet sharing the video of the poultry farmer:

Makandar buried the chicken in the pit after the rates of the chicken dropped down. The price of a live chicken he is currently receiving is Rs. 8-10 whereas the maintenance cost of those chicken is Rs. 50-60. Thereafter, the farmer decided to dig up a hole and dump near about 6000 chickens into it.

The viral video has left people furious on the farmer’s action. When the Tweet went social, many users shared there point of view on the cruelty act.

The poultry industry in several parts of India has been drastically hit due to the rumors revolving around that the COVID-19 is spread through chicken consumption. As a result, the prices of the chicken dropped down miserably.

Last month, the Union Ministry of Animal Husbandry clarified in a statement that chicken can be safely consumed because so far, no report has confirmed its involvement in the Coronavirus outbreak.