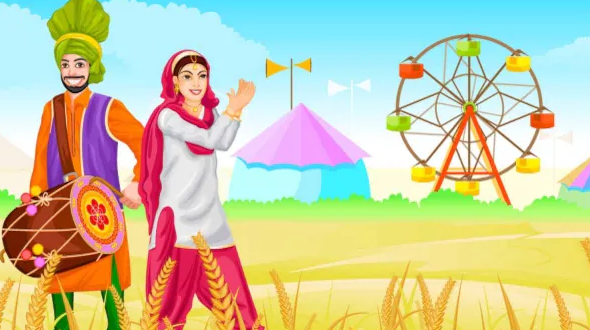 Baisakhi is a spring harvest festival celebrated in Punjab and other parts of North India. It is also known as Vaisakh Sankranti or Vaisakhi. Every year, it falls on April 13 or 14. It commemorates the formation of the Khalsa Panth of warriors under Guru Gobind Singh in 1699 and marks the start of the Sikh New Year. On this day, Hindus commemorate the arrival of Goddess Ganga on Earth.

In her honour, devotees gather for a holy dip along the Ganga’s banks.

In Punjab, Baisakhi marks the harvest of the Rabi crops, and farmers pay their respects by thanking God for a bountiful harvest.

The significance of the Baisakhi

Baisakhi or Vaisakhi is celebrated with great reverence by Sikhs because it is on this day (in 1699) that the tenth Guru, Gobind Singh Ji, laid the foundation of the Khalsa Panth. It is also referred to as the Sikh New Year’s Eve celebration. Guru Gobind Singh Ji, the tenth Sikh Guru at the time, hosted the Baisakhi celebrations that resulted in the formation of the Khalsa in 1699. (to be pure, to be clear, to be free from).

Guru Gobind Singh Ji is widely regarded as the “Final Living Guru of Sikhism.” In conjunction with the establishment of the Khalsa, an army was formed to combat societal flaws as well as the Mughal Emperors and their armies.

Baisakhi is now celebrated by people of all backgrounds, not just Sikhs and Punjabis. It is known as “Khalsa Sirjana Diwas,” or “Khalsa’s Birth.” Baisakhi is celebrated differently by Punjabis and Sikhs, and many of them do so in their own unique way. These are not the same as village harvest festivals. Baisakhi is no longer just a celebration for people in rural areas. It’s also a holiday for people who live in cities and towns.

Sikhs commemorate Guru Gobind Singh, their tenth guru, on this day. On the same day, he established the Khalsa order and gave it a new impetus. Because it is a good time, there are many places in India where people can be baptised on this day. In terms of tradition, it varies from one family to the next. Some food is distributed along the way. The path then ends with more food, such as kadah and langar.

How is this festival observed?

When the crops are harvested, people in Punjab’s villages have a great time. Many people gather for Baisakhi meals in Anandpur Sahib, the Khalsa’s birthplace. People in cities visit gurdwaras with their families on a regular basis. Only Sikhs visit gurudwaras with their families and friends to take holy baths and feast. People of other faiths also go there to do the same thing.

The gurudwaras are illuminated on this day, and there is a 48-hour akhand path and bhog. The day is traditionally marked by kirtan, kadah, prasad, and langar. On this day, women prefer to wear white suits with an orange dupatta to the gurdwara.

On the eve of Baisakhi, Sikhs visit Nagar Kirtans to pay their respects to the Khalsa. There are numerous other events that take place during the festival. They sing religious songs, read religious texts, and pay homage to the Guru Granth Sahib (the Sikhs’ holy book).

Also read, Living in the present with Meditation

On this day, you can also enjoy dance performances such as Bhangra and Gidda. People dress up in their finest attire and share sweets to commemorate the occasion.

Aside from the events listed above, fairs are also held on this day to promote local businesses. Children and teens demonstrate their martial arts talents in the presence of drummers and musicians, while men wield swords, all of which add to the excitement of the event.