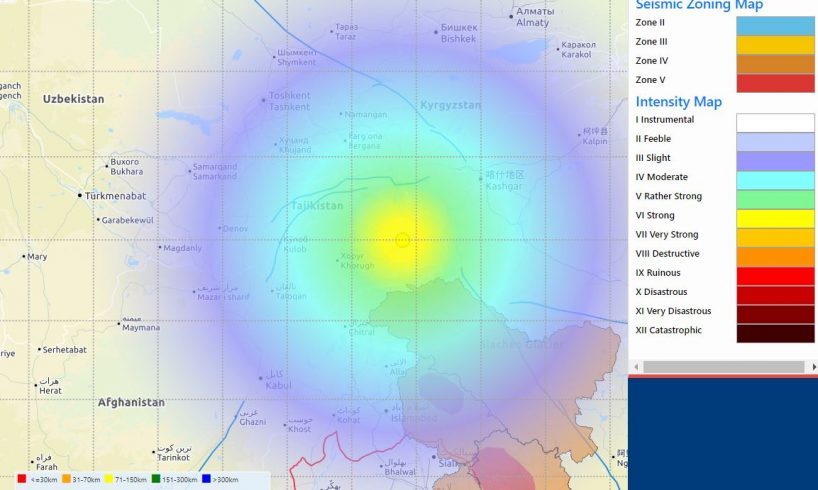 New Delhi: As per the latest information, a powerful earthquake of magnitude 6.3 struck in Tajikistan on Friday with tremors felt across North India and Delhi, that’s prompting people to rush out of their homes.

The epicentre of the earthquake was in Tajikistan, according to India’s National Center for Seismology.

Also, strong tremors were felt in Delhi and surrounding areas for several seconds.

Preliminary readings by NCS had stated the earthquake had a magnitude of 6.1 and its epicentre was Amritsar, this was later revised to Tajikistan

While preliminary readings by NCS had stated the earthquake had a magnitude of 6.1 and its epicentre was Amritsar, this was later revised to Tajikistan. No immediate loss of life or damage to any property was reported, officials said.

J L Gautam from NCS said the initial report came as soon as tremors were felt across northern India, with the earthquake’s epicentre roughly being placed in Amristar. “We had a preliminary magnitude of 6.1 on the Richter scale and that it had occurred at a depth of 10 kilometres below the surface. The epicentre was first identified to be around Amritsar, however, it was later revised after some time to be accurately placed in Tajikistan. The magnitude was also revised to 6.3,” said Gautam

According to the revised estimate, the earthquake was found to have occurred at a depth of 74 km below the earth’s surface at a longitude of 38 degrees north and 73.58 degrees east. “It took place at around 10.31 pm, following which tremors were felt through Afghanistan, Pakistan, and then northern India,” said Gautam.

So, according to the National Center of Seismology, the intensity of the earthquake has been measured 6.3 and its center is close to Tajikistan.

At the same time, according to the US Geological Survey USGS, the intensity of the earthquake is 5.9 and its center is near Murghob, 35 km from Tajikistan.

The latest updates are also awaited but there were no immediate reports of any loss of life or damage to property.

“No reports of any damage so far in Amritsar or other parts of Punjab following the #earthquake. Top officials of @PunjabPoliceInd & local administration are keeping a close watch on the situation. Praying for everyone’s safety.” Punjab Chief Minister Capt. Amrinder Singh tweeted

“Not since the earthquake of 2005 have the tremors in Srinagar been bad enough to force me out of the house. I grabbed a blanket & ran. I didn’t remember to take my phone & so was unable to tweet “earthquake” while the damn ground was shaking,” Omar Abdullah tweeted