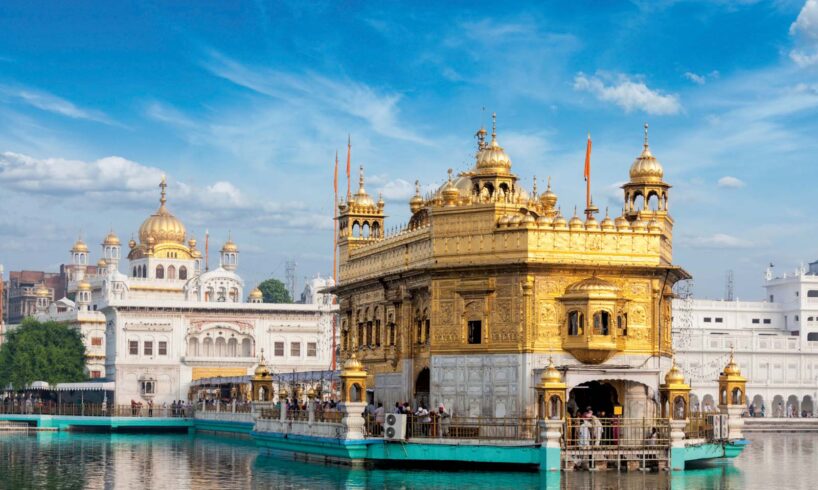 Amritsar, Punjab, India: Amritsar – A City famous for its Golden Temple, is the second-largest city and district of Punjab. It is also one of the fastest-growing cities in Punjab. Amritsar is known as the holy city of the Punjab state.

Apart from all the Spiritual sites, the city holds various museums, forts, old markets, etc. Which will help you to explore the rich cultural heritage, history, art, and the Incidents & struggles of India and Indian people for independence from the Britishers in the 20th century.

It is Just 28 km away from the India and Pakistan Border (Wagah border) and home to one of the most Sacred sites for Sikhism on the earth “The Golden Temple” or “Harmander Sahib”.

The Bhagwan Valmiki Tirath Sthal situated at Amritsar is believed to be the Ashram site of Maharishi Valmiki, the writer of Ramayana. As per the Ramayana, Sita gave birth to Lava and Kusha, sons of lord Rama at Ramtirth ashram. A large number of people visit Ramtirth Temple at the annual fair. Nearby cities to Amritsar, Lahore, and Kasur were said to be founded by Lava and Kusha, respectively. During Ashvamedha Yagna by Lord Rama, Lava and Kush caught the ritual horse and tied Lord Hanuman to a tree near today’s Durgiana Temple.

Founding of the holy city of Amritsar

As per the historic documents Guru Ram Das, the fourth Sikh guru is credited with founding the holy city of Amritsar in the Sikh tradition.

Two versions of stories exist regarding the land where Ram Das settled. In one based on a Gazetteer record, the land was purchased with Sikh donations, for 700 rupees from the owners of the village of Tung.

According to the historical Sikh records, the site was chosen by Guru Amar Das and called Guru Da Chakk, after he had asked Ram Das to find land to start a new town with a man-made pool as its central point. After his coronation in 1574 and the hostile opposition he faced from the sons of Amar Das, Ram Das founded the town named after him as “Ramdaspur”.

He started by completing the pool and building his new official Guru centre and home next to it. He invited merchants and artisans from other parts of India to settle into the new town with him.

The town expanded during the time of Arjan financed by donations and constructed by voluntary work. The town grew to become the city of Amritsar, and the pool area grew into a temple complex after his son built the gurdwara Harmandir Sahib, and installed the scripture of Sikhism inside the new temple in 1604.

The construction activity between 1574 and 1604 is described in Mahima Prakash Vartak, a semi-historical Sikh hagiography text likely composed in 1741, and the earliest known document dealing with the lives of all the ten Gurus.

The circumference of the walled city was around five miles. When in 1849, the British annexed Punjab, Amritsar was a walled city and they build the thirteenth gate to it is known as Hall Gate.

From the tragedy of the Jallianwala Bagh massacre (1919) to Operation Blue Star in the Golden Temple(1984), Amritsar has seen it all. That’s why every street, every place in Amritsar holds its own story. Although there is very much to see, to explore, and to do in Amritsar but we have listed top must-visit and to do things for you.

Top most places to explore in Amritsar –

Your trip should be started by praying to the lord so your first destination should be the golden temple. The moment you reach the Gurudwara sahib you instantly get to know why it is called a GOLDEN Temple, Amritsar. The walls of the temple covered with 24k gold will make you Jaw-dropped.

After clicking the stunning views of the holy place, take a dip in the holy Sarovar (man-made pond), and after cleansing yourself, visit the LANGAR hall (The place where over 1,00,000 people eat food together, yup, over 1 lakh people daily no matter of their caste, religion, gender or creed and that too absolutely free!!) for your meal.

If you want you can also do Sewa (volunteer ship) in the kitchen.

And the most important part of your visit is to explore the Golden Temple from inside and have spiritual prayers.

Tip: Your head should be covered all the time (cloths are available around the gates to cover your head), whether you’re a man or a woman. As there is a strong belief in covering the head in Sikhism.

3 wheelers, taxis, buses, bike taxi, or any kind of public transport, everything will take you to the golden temple from wherever you are in Amritsar city or its outskirts.
Opening time: Always open

Jallianwala Bagh is just a few meters before the golden temple main gates. So by simply walking, you can easily reach there.

Around 30 km from Amritsar, situated India and Pakistan border. Where the daily “Beating the Retreat” ceremony held.
In this ceremony, Both sides army march in the perfect drill meet each other in the middle of the border. The members of the army will then perform a parade and pays tribute to their country. This ceremony literally gives goosebumps to the audience watching. And is very worthwhile to attend the ceremony.
Tip: Make sure to reach early around 1 hour before the parade, to avoid big queues and grab a seat easily as it is first to come and first seat basis.

How to visit: Taxi service is available almost everywhere in the city. Including the golden temple, and all the public transport stations.

Opening time: However, The entrance timing of the border is from 10:00 am to 4:00 pm. But the ceremony timing varies during summers it’s 5:15 pm and in winters it’s 4:15 pm and The overall duration of the ceremony is 45 minutes.

This museum was built in 1977, and have various antique items such as personal items of maharaja Ranjit Singh like his armoury and weaponry, various artefacts, real cons and money of that era, various painting and much more which would take you to that era and give you insight that how the life looked like at that times.

Ho to visit: The museum is 1 km from the city centre, 1.5km from the Amritsar railway junction and around 4km from the golden temple.
So it’s easy to reach the museum whether by walking or any public transport

Opening time: 10 am to 5 pm (Tuesday to Sunday). Closed on Mondays

When to visit Amritsar:

The best time to visit Amritsar is from November – March(winter season) when the weather is comparatively more pleasant which makes the ideal conditions for sightseeing. However, the temperature can also decrease as low as to 5-degree Celsius, but keeping a sweater & jackets with you can help!!

The worst time to visit Amritsar is from April – June (summer season) when the temperature increase as high as to 50 degrees celsius, making imperfect condition for travellers for sightseeing.

June – October is the mediocre time as the city welcomes the monsoon season after the extremely hot summers. The weather can be pleasant with clouds in the sky most of the time, But heavy rainfall in these months can cause inconvenience for the travelers to enjoy their vacation.

How to reach Amritsar :

The Sri Guru Ram Das Jee International Airport of Amritsar is around 10 km from the city centre. It has more than 160 domestic and international flights including direct flights to and from Delhi, Mumbai, Bangalore, Chandigarh,

Amritsar is very well connected by road as it is located on National Highway 1. Public transports like Bus service, taxi service of all types, private and governmental are available very easily from Delhi, Chandigarh, Jammu, Ambala, and Patiala. And for the transportation inside the city, plenty of 3 wheelers, rikshaws, e-rikshaws, taxis, and local buses are available.

The railway is also very well connected to Amritsar city. The Amritsar railway station is connected to all the major cities in India like Delhi, Agra, Ahmedabad, Kolkata, Chandigarh. Mumbai and Hyderabad.
An average train journey from Delhi to Amritsar will take around 6 hours.

As Amritsar is a metropolitan city of Punjab, so there are many options from hotels, motels, hostels, luxury hotels, to choose from.
Tip: Try to stay near Golen temple because it is covered with the markets on all its four sides hence from food joints to the public transport everything is accessible very easily. Plus you can also enjoy the nightlife of Amritsar city very well.