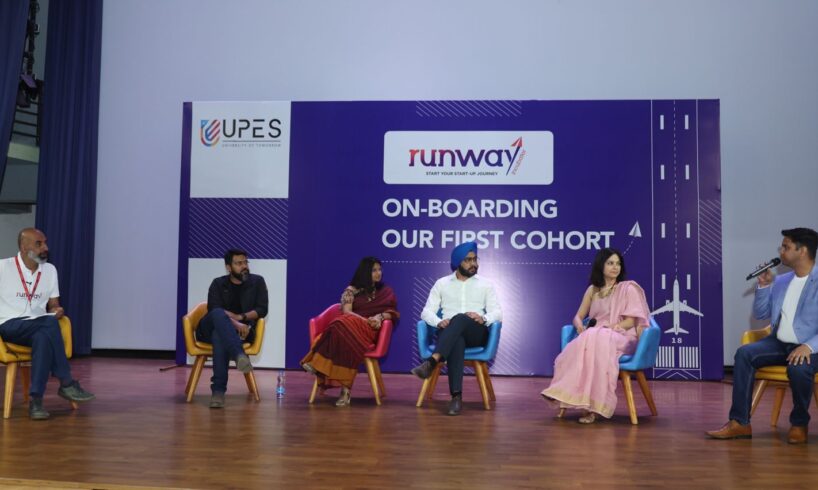 Dehradun(Uttarakhand): In December last year, UPES, a multidisciplinary university in Dehradun launched an ambitious incubation program ‘Runway’. It was aimed to work with start-ups within and outside the university to help them transition into scalable businesses.

Completing a quarter, Runway initiated its first pre-incubation cohort in a two-day event. UPES hosted it with selected 82 start-up ideas from over 400 applications.

In the first round of pitching, 8 start-ups raised more than INR 70 lacs. The group of investors included:

It is to be noted that it was the first instance in UPES and Uttarakhand where funds were raised on the spot.

The eight start-ups that raised funding

Elteridium- Akhil Damodaran is the founder and Dr Rupesh Kumar is the co-founder. It is one of India’s first Blockchain-based smart contract companies.

DAAC- an Automotive Design studio. Siddharth Prakash is the founder and Kishore Tikale, Siddharth Da, and Nithin Sharma are the co-founders.

W&W Organic- A company that sells organic soap bards in paper packaging. Aakansha Simra and Pratiksha are the founders of the company.

AAGYO- a combined solution of hyperlocal marketplace and e-commerce specially targeted to tier 3 and lower cities & towns. Mukul Mehta has founded it.

Anime Devta- Founded by Dev Taneja and co-founded by Himangshu Goswami. The company aims at providing the coolest, unique anime & graphic merchandise at the most affordable prices.

Roadz- Achal Agrawal is the founder. It is an idea that aims at route optimization based on road quality and precise warning of potholes.

“We believe in promoting research”

At the launch of the pre-incubation program, Rahul Nainwal, CEO of Runway addressed the students.

“At UPES we believe in promoting research, innovation, and entrepreneurship whether it is within or outside campus. With this belief we had launched the Runway program and the first fundraising. The incubation event has given it a positive and successful start. The objective now is to nurture and mentor the selected start-up ideas. Also, to encourage more students, alumni, faculty and staff to pursue their start-up dream and get incubated at Runway”.

The selected start-up founders also had an opportunity to interact with entrepreneurs. The panel included

The selected 82 Runway start-up ideas will now go through an eight-week programme. They will learn how to build a business, how to incorporate companies and how to make a pitch to investors.

At the end of the pre-incubation programme, the start-ups will get an opportunity to raise grants.

‘Runway’ is established under UPES Council for Innovation and Entrepreneurship (UCIE. It has been recognized by the government of Uttarakhand as a business incubator. The objective of Runway is to help start-ups refine their ideas. They undergo a learning process involving Incubation, Mentoring, Pitching, Nurturing and Networking.

ALSO READ: How to become a flight attendant in India