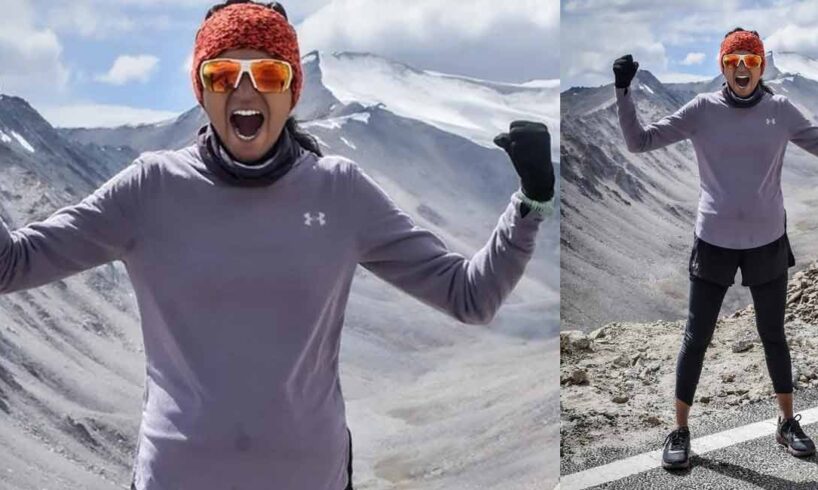 Passion is what drives a person to do the best, and get the best. Along with that, hard work, dedication and consistent efforts are necessary to achieve the goals. We have seen a lot of successful people. We have seen people who have achieved what they believed. In this article, we will discuss one such personality. She is a lady who left a good job that she was doing for the last 10 years and followed what she love.

Sufiya Khan is a marathon runner who became the first woman in the world to complete Manali to Leh ultramarathon. People dream to cover this route on their favourite motorbikes. But this woman has done it by running.

Belonging to a middle-class family, Sufiya Khan was born in Ajmer district of Rajasthan. Her early life has been tragic as she was only 16 years old when her father died. Her mother raised her, looked after her education and helped her achieve her dreams.

In the year 2018, Sufiya quit her airline job as she wanted to follow her passion for running. For 10 long years, she worked at the Delhi Airport as a ground handler. Undoubtedly, the decision would have been tough for her. But her consistent efforts and dedication made this decision a fruitful one.

Not just this Manali-Leh ultramarathon, Sufiya Khan has achieved several milestones. She is a two-times Guinness World record holder. In the year 2018, she broke the national record and covered the Golden Triangle” (720 km) in just 16 days. She also became the fastest woman runner to complete Kashmir to Kanya Kumari. Moreover, in 2021, Sufiya Khan completed “The Indian Golden Quadrilateral Road” and became the fastest woman to do so.

The experience of Leh-Manali ultramarathon

]On September 25, Sufiya started the run at around 7:34 a.m. She completed the run on October 1. It is to be noted that Manali is 2,050 meters above sea level and Rohtang is at the height of 3,500 meters. The extreme terrains and the weather makes it difficult to complete the distance. But Sufiya managed to complete it. She shared that at one time, her oxygen levels came down to 59 per cent. However, her support team helped him gain conscious and she complete the run.

She had started practising and preparing for the ultramarathon 15 days prior. She did several strength exercises, yoga and pranayam to improve her lungs’ efficiency.

Her next project is circumnavigating the world and she has already started preparing for it.