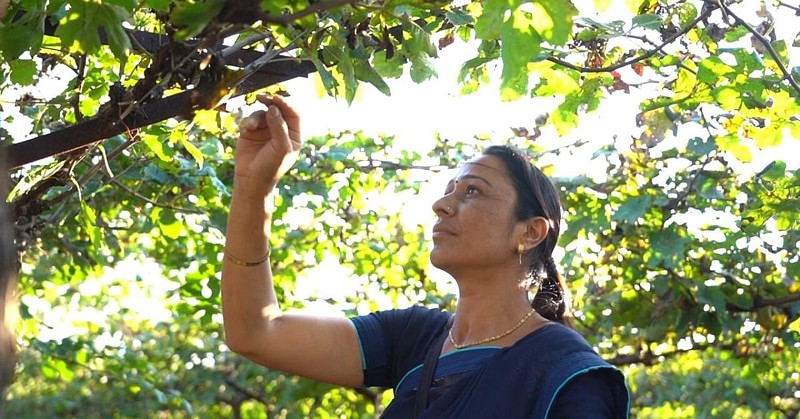 You must have heard that when life puts you down, it is up to you if you want to stay down and cry, or get back up. Undoubtedly, the world praises the one who chooses to get back up, grow, learn and stand taller than you have ever been.

In this article, we will make you know about a woman who perfectly testifies these sayings. A lady who has seen a lot of ups and downs in her life. Her life has been full of struggles. And also, a lot of people were waiting for her defeat. But still, she stood up for herself and proved everyone wrong.

Sangita Pingale, a woman farmer from Nashik, shares that she was told that she could not do farming. “They said you cannot succeed with farming. I wanted to prove them wrong.”

Sangita is growing grapes and tomatoes in her 13-acre of land. However, there was a time when she did not have much to eat.

For 10 long years, she was depressed. Her life had completely changed.

Sharing her experience, Sangeeta says that her father-in-law and relatives helped her a lot. They helped her focus on her life once again.

She lived in a joint family that separated in the year 2017. However, she lost the person who was her support system- her father-in-law. Once again, she was left alone. This family tragedy also meant that now, she was the sole custodian of the 13 acres of land of her father-in-law.

It is always said that necessity is the mother of invention. Sangita Pingale said that the land was the only source of income for her. She had no choice but to learn working in the fields.

“The relatives who separated a few months ago said that it would be difficult for me to look after the fields, children, do household chores altogether. It is easier than said. The relatives claimed that it is not a woman’s field.”

But Sangita let her actions speak for her.

Now, the 39-year-old farmer grows tomatoes and grapes in her field, yields tonnes of produce and earns lakhs of rupees. It is to be noted that Sangita is also a science graduate.

Just like every other woman that we see around us, Sangita Pingale has been a multi-tasker, an all-rounder. She had to play multiple roles to earn bread and butter.

She had to take a look in exchange for her jewellery. Also, to raise capital for farming, Sangita borrowed money from her brothers.

Her brother helped her understand various aspects of agriculture and farming.

“They helped me understand the process, different aspects and the chemicals used to grow grapes. Being a science student was an added advantage. Many times, I could not read and understand the content of the products, but my knowledge and learnings helped.”

She had to face different difficulties like lack of labour, untimely and unseasonal rains, pest infestations etc. She said, “I believe that some aspects of farming are solely handled by men, including tractor driving, fixing and repairing machines, finding sellers etc. But I had to manage everything on my own. Therefore, I learned to drive the tractor and also, repair the parts.”

Her patience and hard work paid off. Now, her field produces a yield of around 800-1,000 tonnes of grapes every year. Every year, she earns around 25-30 lakh. Also, Sangita Pingale has become able to provide quality education to her children. Her daughter is pursuing graduation and her son is studying in a private school.