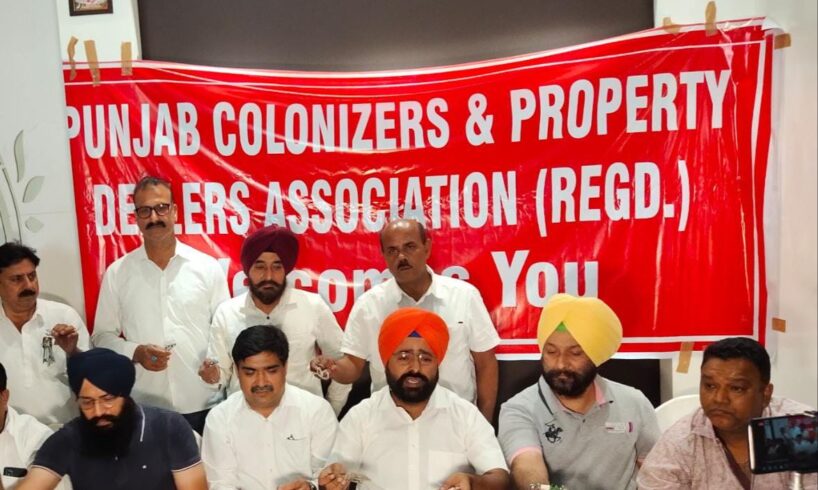 Ludhiana: Punjab Colonizers and Property Dealers Association on October 21 protested against the recent closure of registries and meters in Punjab. The association members held a press conference at a hotel on Chandigarh Road protesting against the decision.

President of the association Gurwinder Singh Lamba said that the industry has already suffered a lot because of the coronavirus pandemic. Now, instead of helping the property dealers, the government was increasing their troubles by closing the registries and meters.

“The government is opening registries inside the “lal lakir” area. But in contradiction, it is closing registries outside the area. On one hand, the government is waiving the electricity bills of the common people. On the other hand, it is shutting down the electricity metres of poor people who have built their own houses and paid the cost of regularization,” Gurwinder Singh said.

Further, he said, “Even after collecting billions of rupees for NOC, these are not being provided to the public. The government has not fulfilled the promises made to us in the election manifesto, in 2017.”

Gurwinder informed that at various times, the union has given information to the government. However, no hearing has been held. He warned the government to resolve the associations’ issues by Diwali. The association members said that they would close their businesses and hand over the keys of offices to the CM and protest. Chairman Darshan Lal Lod, Vice President Jagdish Jagga, General Secretary Deepak Badial, Ankur Singla, Jaspreet Singh Chawla, Sham Verma, Amritpal Jand, Mani Habowal were also present on the occasion.