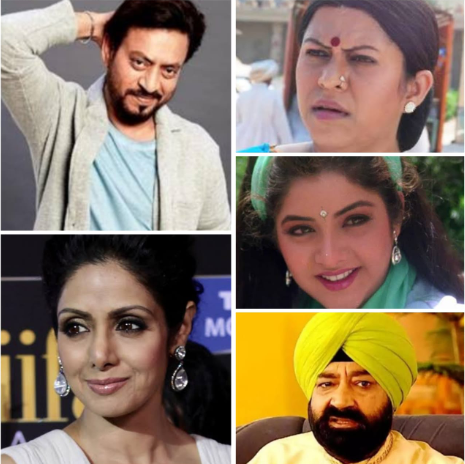 It is always very heartbreaking to hear about some of the renowned celebrity’s death. In our Bollywood industry, there are many legendry actors who left the world leaving in tears. Some were actually on the verge of dying, but some actors left us unexpectedly and faced untimely death.

Here are 5 legendry Bollywood actors who died too soon:

The actor left us today leaving the country in a shock. He died at the age of 53 at Kokilaben Dhirubhai Ambani hospital today. He was being treated for a colon infection. His last rites were performed in Mumbai today. The actor has given us blockbuster movies like Hindi Medium, Angrezi Medium, Lunch Box, Paan Singh Tomar. He also represented India in Hollywood as he did Life of Pi, Jurassic World, and Slumdog Millionaire.

The queen of Bollywood cinema left us on February 24, 2018. At the time of her death, she 54 years old. She was in Dubai to attend her nephew’s wedding. Her family returned to India but she stayed there. The whole of the industry was shocked with her untimely demise. She had given the best of the movies to Indian cinema like Mr. India, Chandni, English Vinglish, Nagina, Chaalbaaz, Himmatwala, and Judaai.

One of the best satirist Indian cinema had was Jaspal Bhatti. He left us at the age of 57 when he died in a car accident on October 25, 2012. He is a legendry actor in the Punjabi film industry and he gained popularity from his ‘Flop Show’. He did Bollywood films like ‘Fanaa’, ‘Jaanam Samjha Karo’ and ‘Hamara Dil Aapke Paas Hai’.

One of the most beautiful actresses of her era, Divya Bharti stepped into Bollywood in 1992 after giving blockbusters in the Telugu film industry. Her debut Bollywood movie was ‘Vishwatma’. She gained popularity from movies like ‘Shola Aur Shabnam’ and ‘Deewana’. She mysteriously died at the age of 19 only as she fell from the balcony of her apartment in Mumbai.

She was also one of the finest actors in Indian cinema. She did a great performance in the movie ‘Bhool Bhulaiya’. She was last seen in Ram Gopal Varma’s ‘Not a love story’. She was only 39 when she died in the year 2011 as she was suffering from cancer.