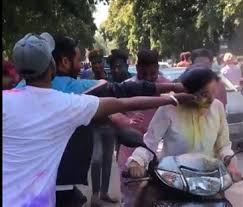 Chandigarh: Recently, a clip of two ‘Women harassed in Chandigarh on streets’ on Holi went viral on all social media platforms which left everyone furious. The incident took place in Chandigarh, allegedly, inside the Panjab University.

The video shows a group of men throwing and putting colors on two girls against their wishes. The girls were riding their Activa on the streets of Chandigarh. The video of ‘Women harassed in Chandigarh streets’ was allegedly shot inside the PU campus witnessing the shameful act. However, the girls were seen negotiating their way with the help of traffic. In the process, they were about to fall.

Meanwhile, after the video went viral, people shared it on the Twitter handle of Chandigarh traffic Police as they demanded strict action against the men involved in the harassment.

However, the police were successful in tracing the girls down but the women refused to lodge a complaint on the matter.

The viral video of “Women harassed in Chandigarh on streets” was shared by a Twitter user named Manoj Muntashir who questioned by saying, “So this is your Holi? Shame or you even blew that in the air with gulaal?” Another user tagged SSP/Traffic, Chandigarh and requested them to look into the matter. Afterward, the SSP claimed that the police had already started the investigation.

Are you looking for more NEWS

The viral video outraged the whole social media. Thereafter, Twitter reacted with anger and concern regarding the safety of women in the city.