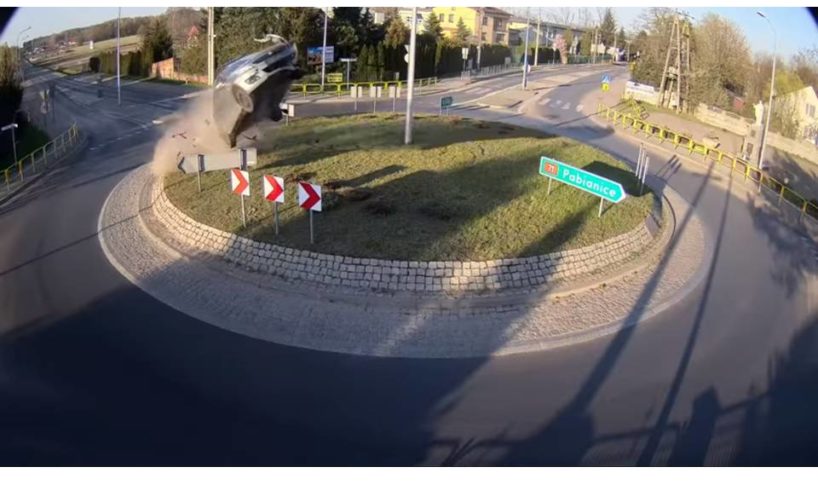 Driving on roads is very risky if not drive carefully. And the safety of self and others should be the priority of a driver. But some time incidents happened on roads make us think that how this can happen? As a driver of a Suzuki Swift in Poland miraculously escaped a shocking crash caught on a camera placed at the roundabout.

This incident happened in a town called Rabien in Polland last Sunday. And without camera footage one can not be imagined that it can happen.

Scary Video of Maruti Swift caught on the CCTV cameras

This crash was caught on the CCTV cameras installed overlooking a roundabout. The car hit at a high speed that it flies on air for quite a while.

This video shows that the driver was coming through an empty road at a high speed. When Driver entered the roundabout, he kept going straight at a very high speed. The impact was such that the Suzuki Swift flies into the air to a height of 5-7 meters after hitting the embankment.

Everyone can see how the car missed the CCTV camera by just inches. The car flew through some trees and landed at a nearby church.

The Drive a 41-year-old man was conscious but stuck in the car. So firemen’s intervention was necessary. And when the wounded man was removed from the vehicle, the car started to burn.

“firefighters helped to get him out”

Firefighters had a tough time helping the driver and getting him out of the vehicle later.

The man was conscious but stuck in the car, so firemen’s intervention was necessary. When the wounded man was removed from the vehicle, the car started to burn. So firefighters had to help to get the driver out of the vehicle later.

As per the reports the man was taken to the hospital after the incident. And the city police reported that the driver was smelling of alcohol when he was being rescued and moved to the hospital. Later on, a blood test was done and it confirmed that he was under the influence of alcohol at the time of the incident. The report said he had about 2.8 ml of alcohol per 100ml of blood in his body.

But it is not clear what speed the driver was driving at the time of the incident. Police have begun an investigation into the incident. And driving a car under the influence of alcohol poses up to two years in prison in Poland.

(This Video was shared on Telewizja Aleksandrów Łódzki facebook page)