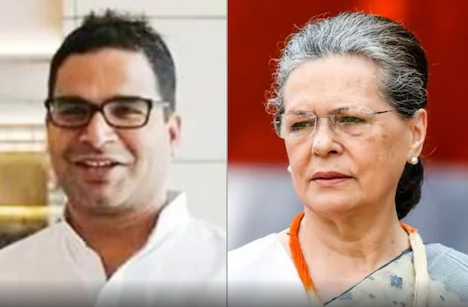 Prashant Kishor, an election strategist, met with Congress chief Sonia Gandhi for a planning session on the next round of assembly elections due this year and the next general elections, amid speculation that he might join the party. Mr. Kishor’s proposal for the party’s revival before 2024, as well as a game plan for the general elections that year, is being considered by Congress.

They were meeting for the second time in three days. On Saturday, Mr. Kishor delivered a detailed presentation on Mission 2024 to a select group of Congress leaders.

Agenda for meeting among Prashant Kishore and Sonia Gandhi

The agenda for today’s meeting included assembly elections in Gujarat and Himachal Pradesh later this year, as well as state elections in Karnataka, Chhattisgarh, Madhya Pradesh, and Rajasthan next year, according to news agency Press Trust of India.

Mrs. Gandhi hosted a meeting at her home with a party team tasked with assessing the Mission 2024 plan.

Her daughter and party General Secretary Priyanka Gandhi Vadra, as well as senior leaders Mukul Wasnik, Randeep Singh Surjewala, KC Venugopal, and Ambika Soni, attended the meeting, and the group is expected to provide a report on the matter within a week.

Who is Prashant Kishor?

Prashant Kishor is an Indian Political Strategist and an election magician. He was selected in Forbes India’s prestigious list of 20 people to watch in the 2020s. He has created several success stories for political parties in state and national elections.

According to top leaders, Sonia Gandhi will decide whether Prashant Kishore, a poll strategist, will join the Congress and what role he will play in the 2024 national election. Sonia Gandhi met with senior leaders and will make a decision after speaking with her children, Rahul Gandhi, and Priyanka Gandhi Vadra.

The AAP won the Delhi assembly elections with an overwhelming majority of 62 out of 70 seats. Everyone was looking at Prashant Kishor, the man who made it all happen. In December of last year, Arvind Kejriwal, the AAP president, invited Prashant Kishor to help shape his election campaign. The results are encouraging. It will be fascinating to learn what made Prashant Kishor such a successful election strategist.

He was born in 1977 in the Rohtas district village of Konar. His father later relocated to Buxar, Bihar. He finished his secondary education in Buxar before moving to Hyderabad to study engineering. Jahnavi Das is the name of his wife (Doctor). The couple has one child, a son. He worked as a public health specialist at the United Nations before entering Indian politics. He devised election strategies for a number of political parties, including the BJP and Congress.

Prashant Kishor met Sonia Gandhi on Saturday and gave a detailed presentation on an election for the 2024 Lok Sabha elections. According to the news agency ANI, the founder of the Indian Political Action Committee (I-PAC) is expected to join the Congress in the coming days. During the meeting, Kishor also suggested that the Congress focus on 370 seats for the 2024 elections.

Kishor also suggested that the Congress run alone in a few state assembly elections where it is strong or has finished first or second in previous elections.

There has been considerable resistance against Mr. Kishore and his plans from a section within the party, in view of his organization IPAC’s help to powerful regional leaders Mamata Banerjee, Jagan Mohan Reddy, and K Chandrashekar Rao in state elections. Both Ms. Banerjee and Mr. Reddy had won, decimating the Congress in the process in Bengal and Andhra Pradesh.