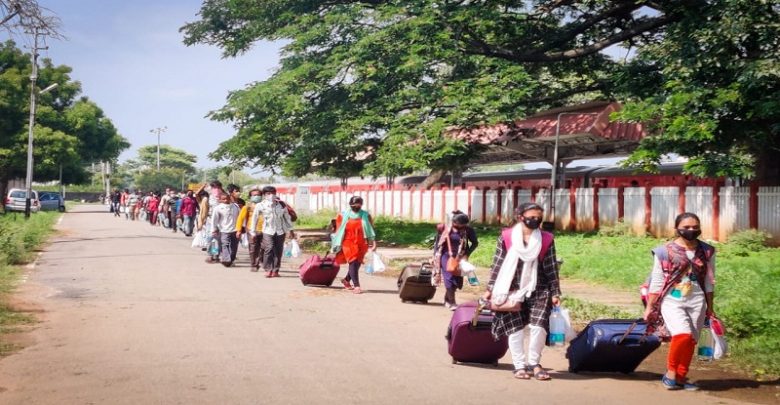 Corona: Corona Virus’s global cases surpassed 8 million and over 0.4 million people have succumbed to the infection. Looking at world European borders have been reopened. And China is also scrambling to control the spread of a fresh outbreak of coronavirus in Beijing. As there is a fear of a second wave of the infection in the country. Also reopening continued in Mexico and Brazil despite cases climbing in the two largest nations in Latin America.

The world is still waiting for any solution to come out of Coronavirus infection. Other countries of the world feeling a dangerous wave of Coronavirus.

This Coronavirus is also increasing and affecting life in India day by day. And infection is affecting people’s lives as the number of infected more than 3.40 lakhs in India. The death toll of the people in India is more than nine thousand.

Is India reaching towards community transmission?

ICMR describes that there are four stages of the coronavirus outbreak:

What is herd immunity?

Herd immunity (also called herd effect, community immunity, population immunity, or social immunity) is a form of indirect protection from infectious disease. That occurs when a large percentage of a population has become immune to infection. Whether through vaccination or previous infections, thereby providing a measure of protection for individuals who are not immune.

“Once a certain threshold has been reached, herd immunity gradually eliminates a disease from a population”

Individuals can become immune by recovering from an earlier infection or through vaccination. Some individuals cannot become immune because of medical conditions, such as immunodeficiency or immunosuppression, and for this group, herd immunity is a crucial method of protection. Once a certain threshold has been reached, herd immunity gradually eliminates a disease from a population. This elimination, if achieved worldwide, may result in the permanent reduction in the number of infections to zero, called eradication. Herd immunity created via vaccination contributed to the eventual eradication of smallpox in 1977. And has contributed to the reduction of the frequencies of other diseases. Herd immunity does not apply to all diseases, just those that are contagious. It means that they can be transmitted from one individual to another. Tetanus, for example, is infectious but not contagious, so herd immunity does not apply.

Herd immunity was recognized as a naturally occurring phenomenon in the 1930s when it was observed that after a significant number of children had become immune to measles, the number of new infections temporarily decreased, including among susceptible children. Mass vaccination to induce herd immunity has since become common and proved successful in preventing the spread of many infectious diseases. Opposition to vaccination has posed a challenge to herd immunity, allowing preventable diseases to persist in or return to communities that have inadequate vaccination rates.

If a disease spreads to a large part of the population and the immunity of the human being helps to prevent the spread of infection of that disease, then those who fight the disease and get fully cured are ‘immune’ from that disease. Go, that is, they develop immunological properties. In them, competent anti-bodies are prepared to compete with the virus.

BBC also explained herd immunity in his reports. As per the reports published in BBC, As more people become immune, the risk of spreading the infection decreases. This also indirectly provides protection to those who are neither infected nor ‘immune’ for that disease.

“If most people of a herd of humans (herd in English) become immune to the virus, it is very difficult for the virus to reach others in the middle of the herd and its spread stops after a period.”

As per the reports Dr. Eduardo Sanchez, Chief Medical Officer of the American Heart Association, has tried to explain this in his blog. Dr. Eduardo Sanchez writes in his blog that, “If most people of a herd of humans (herd in English) become immune to the virus, it is very difficult for the virus to reach others in the middle of the herd. And its spread stops after a period.” This process takes time. At the same time, the idea of ​​’herd immunity’ usually comes when the safety of vulnerable people is ensured with the help of a vaccination program. “

As per the reports, it is estimated that ‘herd immunity’ against Covid-19 can develop in a community. But if only after when about 60 percent of the population has been infected with the coronavirus. And if they have become immunized by fighting it.

But another point to remember is that to reach the level of herd immunity, about 80 percent of the population needs to be immunized(according to Johns Hopkins University).

And if four out of every five people are not infected even after coming in contact with the infected person, then the infection can be kept under control. However, it also depends on how contagious the disease is. It is usually necessary to have the immunity of 70 to 90 percent of the population to reach the level of herd immunity.

“Polio, chickenpox, and Measles are some of the contagious diseases that once used to be very common. But These are now rare in places”

Polio, chickenpox, and Measles are some of the contagious diseases that once used to be very common. But these are now rare in some developed countries because vaccines have helped to reach the level of herd immunity.

So if there is an infectious disease whose vaccine has not been prepared. There is already an immunity in adults about that infection. But it can still infect children or people with a weak immune system.

In the case of many of the diseases mentioned above, it has been seen before the vaccine is made.

“Other viruses like the flu virus keep changing with time”

Some other viruses like the flu virus keep changing with time. So the old anti-bodies which are prepared in the human body do not work. And the person gets infected again. In the case of the flu, this change occurs in less than a year.

“We also can expect that people with immunity, to not to be infected. But only for a few months or even years, not for life”

So if as the source SARS-COVI-2 is responsible for Covid-19 like other coronaviruses. Then we also can expect that people with immunity, to not to be infected. But only for a few months or even years, not for life.

But some experts also warns about the risk of herd immunity and they have there reasons for this? We will share the details in our next article