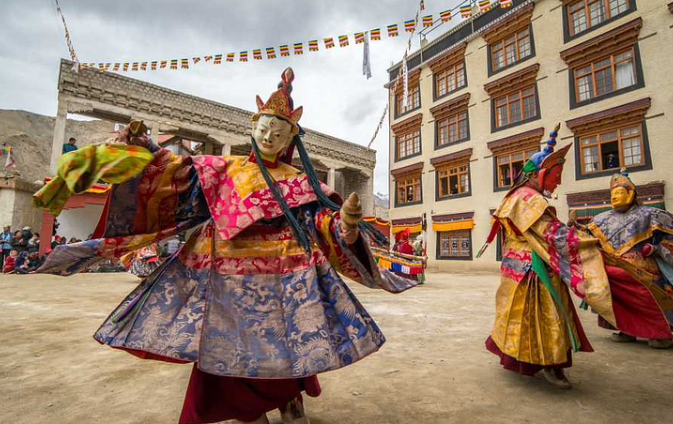 India is famous for its vast cultural history, customs, and a plethora of colorful festivals. The festivities are full of exciting components, from vivid clothing to unusual customs. It’s always a blast to see and learn about the region’s vibrant culture during these events, which also include local arts, handicrafts, and cuisines.

So, here’s a list of some of India’s greatest and most well-known festivals that you should consider attending this summer:

In the months of May or June, Mount Abu, is a prominent pilgrim tourism center and the state’s lone hill station. It hosts an annual summer festival. The two-day celebration takes place on Buddha Purnima, the auspicious full-moon day. It is famous for its lavish cultural events, dancing, music, fireworks, and more.

The event offers a feast of folk and classical music. As well as a glimpse into Rajasthan’s tribal life and culture. The festival kicks out with a traditional parade with folk dance performances, followed by a boat race on Nakki Lake. The second and third days are dedicated to a variety of entertaining competitions, such as skate races and tug-of-war.

The festival celebrates the inhabitants of the hill station’s joy by showing the best of Rajasthan’s arts and traditions. Furthermore, the people’s warmth and cultural history make the event an unforgettable experience for anybody who attends.

The Ao tribe of Nagaland celebrates the Moatsu festival on May 1st in the town of Mokokchung. The three-day event is a sign of communal connection.

Villagers decorate their homes and assemble around bone fires to sing and dance traditional songs and dances during Moatsu. The performances are in thanksgiving to God for assisting in the proper growth of the crops. Sangpangtu is a symbolic ritual in which a large fire is set and people sit around it. People serve traditional cuisine and rice beer to support the celebrations is one of the festival’s symbolic rituals.

To visit Mokokchung during Moatsu allows us to experience a cultural event. It celebrates the Ao tribe’s heritage and lifestyle via traditional songs and folk dance performances.

To visit Mokokchung, one can travel by air to Jorhat (Assam) and take a hired taxi or daily cab services. If traveling by train, then Mariani in Assam is the nearest railway station to get down. From there hire a private passenger vehicle or a shared taxi. That will approximately take 3 to 4 hours through lush evergreen hills.

The Hemis festival is one of the most prominent Buddhist celebrations in Ladakh. That takes place every year on the 10th day of the Tibetan lunar month Tse-Chu. The two-day event marks the birth anniversary of Guru Padmasambhava. The Indian Buddhist mystic is symbolic of the victory of good over evil. The festival is held in the Hemis Monastery that dates back 300 years.

The traditional mask dance performed by the Lamas to the beats of drums, cymbals, and horns known as Cham is a treat to watch. Vibrant costumes are worn by the Lamas and monks wear their traditional long gowns. They also perform plays and also wear elaborate masks and headgear. Every mask holds a special significance associated with it. Not just that, the colorful festival also showcases the traditional handicrafts of the area.

The main airport is in Leh, which is around 34 kilometres away from Hemis. After arriving at the airport, take a cab to Hemis. The Jammu Tawi railway station is the closest station. From the station, taxis are available to transport you to Hemis.

The world flower festival, which takes place every year in Gangtok’s capital, is a month-long event that begins in May at the White Hall complex. The festival, which is organize by the Government of Sikkim’s Tourism Department, is a flora celebration that features hundreds of different flowers and plants, new destinations from all over the world. There is also an unique exhibit of several types of bamboo, which are abundant in Sikkim and play an important role in local life.

The flower show is follow by a grand food festival, where the visitors can indulge in authentic Sikkimese delicacies.

The event is a fantastic chance for biodiversity and environment enthusiasts to see a wide variety of plants while also attend seminars that provide a wealth of relevant information from specialists. There are also various adventure activities available, such as rafting on the Teesta River and yak safaris.

The main airport to Gangtok is Siliguri’s Bagdogra International Airport, which is around 150 kilometres distant. After going to the airport, one may drive to Sikkim. If you’re travelling by train, the nearby stations in West Bengal are New Jalpaiguri (125 km) and Siliguri (144 km).

Observed in the honour of Goddess Ganga, the Ganga Dusshera is a 10-day-long festival, held in the month of May or June in the state of Uttarakhand. The day marks the descent of the sacred Ganga on Earth. Also known as the Dasar Festival, it starts on the Amavasya night (waxing moon) of the Hindu calendar and ends on Dashami tithi (10th Day).

The festival is famous for an Aarti that takes place on the bank of the Ganges in the popular pilgrimage destinations of Haridwar and Rishikesh. The devotees take a dip in the holy water of the river to cleanse their soul and all their sins. After taking a bath people also meditate on the banks of the river.

Besides, Haridwar and Rishikesh, the Ganga Dussehra is also celebrates at major ghats of India such as Varanasi, Prayagraj and Garhmukteshwar. The Aarti that takes place in the evening is a sight to behold, with hundreds of earthen lamps being put afloat on the river. And the whole atmosphere gets resonating by the chants of the priests.

The main airport is Dehradun’s Jolly Grant Airport, which is around 37 kilometres from Haridwar. Once at the airport, take any local car available outside to get to Haridwar by road from Dehradun.

The airport in Varanasi is well accessible to several of India’s main cities, notably Delhi and Mumbai. International visitors can connect flights from Delhi airport, which is very well connects to all of the world’s main cities.

The Yuru Kabgyat is an important Buddhist festival, held in Leh, Ladakh for two days. It is celebrated at the historical Lamayuru Monastery. The festival dedicated to Yama (God of Death) and Padmasambhava (the Second Buddha), is attended by Buddhists from across the globe.

Similar to the Hemis festival, the main attraction of the festival is the masked dances or chams performed by monks to keep evil spirits at bay. In a cham, monks adorn their faces with large vibrant masks and move around in circular motions to the beats of cymbals and drums. Prayer wheels scattered throughout the monastery are a delightful sight.

It is a festival, celebrated with tremendous pomp and enthusiasm. Where colourfully dressed Buddhist monks participate in the dance drama. This festival is a great opportunity to get insights into the intricacies of Buddhism and the teachings of Lord Buddha.

The main airport is Leh Airport, which is around 125 kilometres from Lamayuru and roughly a 4-hour drive away. One may simply rent a cab or take a bus to Lamayuru from the airport. Furthermore, the site has a good road network that connects it to the rest of India.

The Shimla festival marks the arrival of the summer season in the capital of Himachal Pradesh and also is celebrated as a tribute to the gods for a bountiful harvest. The festival which started in 1960, hosts several events for the tourists ranging from a gala of musical performances, cultural activities, folk performances, local handicraft exhibitions, fashion shows, dog shows and even more.

The festival is held every year at the Ridge Maidan, a large, open space situated in the middle of the city that has ample area to play host to the festival.

The summer event promotes tourism in Shimla. It’s also a terrific way for visitors to learn about the local culture through music, handicrafts, and cuisine.

The main airport is Jubarhati, which is about 23 kilometres from the town. To travel to Shimla from the airport, simply take a cab from the airport. Kalka railway station is approximately 96 kilometres away. To go to Shimla, rent a private cab or take a taxi from Kalka station.

Yercaud is a hill station near Salem, Tamil Nadu, famous for its orange trees, coffee, and spice farms. The summer festival, which occurs every year in the second week of May. It is a much-anticipate and sought event in the state. The flower exhibition, which will feature lakhs of flowers and many floral constructions. It is built by the horticulture department, is one of the main attractions.

Other than the flower show, the festival also hosts a variety of other events and activities such as boat races, dog shows, cultural events, and more. The idea of organizing the summer festival is to draw attention to the importance of nature and conservation.

The nearest railway station is at Salem which is about 35 km from Yercaud and from there one can travel by cab or bus to reach the destination. The nearest airport from Yercaud is Salem Airport which is located at a distance of 47 km from the town.