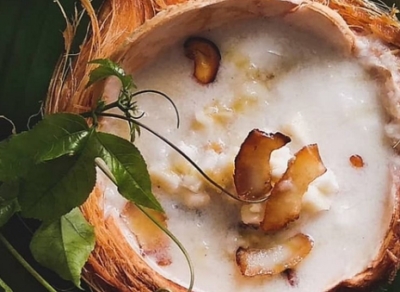 Mithais, or sweets, have been an important part of the traditional Indian diet for centuries. Its history can be traced back to at least 500 BCE. This is the time when people used to produce raw sugar or jaggery, as well as refined sugar. Ayurveda even recommends eating sweets before beginning a meal because they activate taste buds and take the longest to digest.

Desserts are inextricably linked to our lives. Whether it’s a celebration with lustrous ladoos, festive kaju katlis, and delectable sandesh, a bowl of sweet chutney, or a bowl of comforting payasam. Our culinary portfolio includes a variety of unique sweet dishes, each with its own texture, taste, flavours, and richness. Here in this article, you will get to know about some of the lesser-known yet mouth-watering desserts of India.

Nap Naang, a unique and delicious Nagaland dessert. It is a pudding made from glutinous or sticky black rice, which gives it a distinct nutty aftertaste and a deep purple hue. This is a type of kheer that is cooked in milk and flavoured with nuts. Mildly sweet, this creamy dessert is also high in fibre and complex carbohydrates. This makes it a rare guilt-free delicacy for the health-conscious.

This sweet is Bihar’s pride and joy. The unusual surprise of a vegetable-like pointed gourd or parwal as a sweet makes this such a special dessert. It is made with sweet khoya-based filling stuffed inside pointed gourds. The delectable sweetmeat is a perfect example of a sweet and savoury dessert.

Adhirasams, which resemble modern doughnuts in appearance, date back to the 16th century. Adhirasam has different names in different regions. It is known as Sirsa in Chhattisgarh, Anarsa in Marathi, and Arisa pitha in Odia. It is a pastry made from rice flour, jaggery, butter, and pepper that is shaped like a vada. Adhirasams are particularly well-known in Tamil Nadu and Karnataka. The historical references trace it back to the reign of Vijayanagara emperor Krishnadevaraya.

Pootharekulu is a wafer-like sweet made with transparent rice paper and a special type of rice batter called jaya biyyam that originated in the small village of Atreyapuram in Andhra Pradesh. It is a time-consuming process that involves coating thin films or rice papers in sugar and ghee and stuffing them with dry fruits and gur or jaggery.

Elaneer Payasam, another treasure from the southern part of India, is known for its subtle and distinct flavour that is unlike anything you’ve ever tasted before. This quick version of kheer, made with tender coconut pulp and condensed milk, is a fantastic addition to your daily meals.

Although the charm of roshogolla and sandesh is unrivalled in Bengal, this lesser-known gem known as Shorbhaja promises every bite to be filled with rich and decadent wonder. This delicacy is now only available in a few West Bengal sweetshops, mostly in the state’s interior, and is made with condensed milk mixed with leftover sandesh that has been deep-fried in oil or ghee.

Dehroris are delicious dumplings made of rice and curd that are deep-fried in ghee and sweetened with chashni or sugar syrup. They are primarily made in Chhattisgarh during any major festival. This sweet, which is often served with a glass of buttermilk, is often recommended as a way to regulate body temperature, especially during the region’s arid summers.

Pitha appears to be a simple rice flour dumpling or cake at first glance, but it is actually a pocket of sweet surprise. People in the eastern states of India, particularly West Bengal and Assam, prepare it. It is made with a sweet stuffing of jaggery, preferably nolen gur, khus khus or poppy seeds, khoya, sesame seeds, and coconut. A monsoon and winter delicacy, it is frequently prepared to celebrate the Makar Sankranti festival in Bengal, and it is an important food during the Bihu festival in Assam.

While Bebinca is one of Goa’s most popular desserts, one cannot overlook it. Those who have a sweet tooth must try it. Patoleo is a fragrant and flavorful steamed sweet made by spreading rice paste over a turmeric leaf. The filling consists of Goan coconut jaggery, freshly grated coconut, and cinnamon powder.

Madhurjan Thongba is a traditional dessert from northeast India, particularly Manipur. It consists of deep-fried gramme flour or besan dumplings. These are dipped in a thick base of sweet condensed milk flavoured with bay leaves and cardamom. Some people also top it with crushed nuts or freshly grated coconut.

ALSO READ: Meals for dogs at Rs 5 from Jaipur’s kitchen