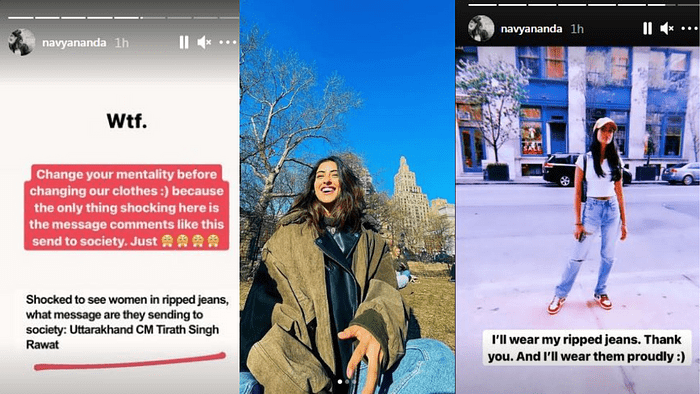 Uttarakhand chief minister, while attending a workshop organised in Dehradun, expressed his thoughts over women wearing ripped jeans and said they cannot provide the right environment for children at home.

Mr. Rawat made the comments on Tuesday at a workshop organised by the Uttarakhand State Commission for Protection of Child Rights in Dehradun.

Chief Minister Tirath Singh Rawat just made a statement but that did not go down well with internet users. He said, “If this kind of woman goes out in the society to meet people and solve their problems, what kind of message are we giving out to the society, to our kids? It all starts at home. What we do, our kids follow. A child who is taught the right culture at home, no matter how modern he becomes, will never fail in life.

He expressed his distaste for “bare knees” being exposed by children and bemoaned the fact that while the west followed India’s yoga and covering their body, “we run towards nudity.”

“Kaynchi se sanskaar (culture by scissors) – showing bare knees, wearing ripped denim and looking like rich kids – these are the values being given now. Where is this coming from, if not at home? What is the fault of teachers or schools? Where am I taking my son, showing his knees and in tattered jeans? Girls are no less, showing their knees. Is this good,” he said.

Among the first to react to the Uttarakhand Chief Minister’s views was Congress leader Sanjay Jha.

“Wearing “#rippedjeans” destroys our culture, it seems. It leads to substance abuse. And a societal breakdown. Women should strictly avoid this sacrilege against our pristine customs, says Uttarakhand CM. Dear BJP, this is your CM Tirath Singh Rawat: Do you endorse this,” Mr Jha posted.

“Is this the mentality of Chief Minister? In this modern India where are we heading,” asked the Youth Congress in a tweet.

Taking to her Instagram stories, Navya wrote, “WT*! Change your mentality before changing our clothes because the only shocking here is the message comments like this send to society.”

And now #rippedjeans has been trending on Twitter. Another user Kadambini Sharma wrote on Twitter, “Message is that women can and should wear what they want. Simple. Don’t stress over it….#rippedjeans are cool….summers mein shorts be chalega…deal with it”